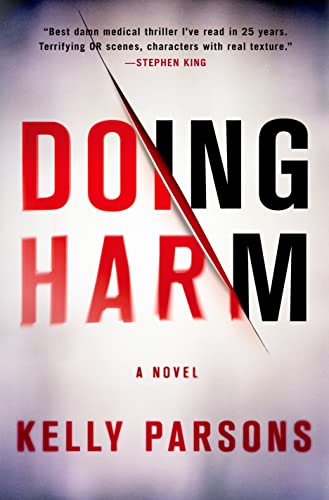 "Best damn medical thriller I've read in 25 years. Terrifying OR scenes, characters with real texture." --Stephen King "Doing Harm is a terrific medical thriller--compelling, gripping, and terrifying." --Harlan Coben, author of Six Years "A twist worthy of a surgical knot. Flawed characters standing on moral pedestals. Insight into the world of medicine and the ambitious geniuses who make life and death decisions. Doing Harm is more faction than fiction, presenting a world so close to our own that you find yourself second guessing the characters as if they're sitting next to you. Repeatedly, I found myself breathless and troubled yet compelled to keep reading. Brilliant." --Ridley Pearson, author of Choke Point "A classic cat-and-mouse game with a refreshing, unexpected twist. It opens with some remarkable bait--dangling a hook that the reader will definitely want to bite. Top notch storytelling." --Steve Berry, author of The King's Deception

Steve Mitchell, happily married with a wife and two kids, is in line for a coveted position at Boston's University Hospital when his world goes awry. His over-reaching ambition causes him to botch a major surgery, and another of his patients mysteriously dies. Steve's nightmare goes from bad to worse when he learns that the mysterious death was no accident but the act of a sociopath. A sociopath he knows and who has information that could destroy Steve's career and marriage. A sociopath for whom killing is more than a means to an end: it's a game. Because he is under a cloud of suspicion and has no evidence, he knows that any accusations he makes won't be believed. So he must struggle to turn the tables, even as the killer skillfully blocks his every move. Detailing the politics of hospitals, the hierarchy among doctors and the life and death decisions that are made by flawed human beings, Doing Harm marks the debut of a major fiction career.