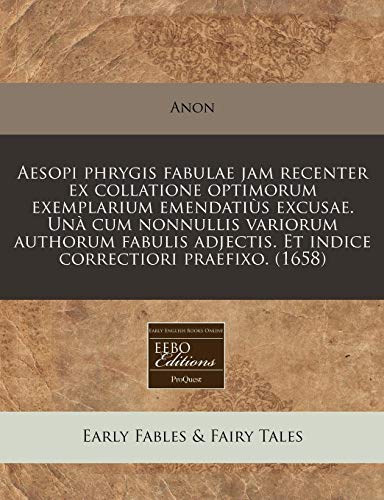 EARLY FABLES & FAIRY TALES. Imagine holding history in your hands. Now you can. Digitally preserved and previously accessible only through libraries as Early English Books Online, this rare material is now available in single print editions. Thousands of books written between 1475 and 1700 can be delivered to your doorstep in individual volumes of high quality historical reproductions. This series includes many translations, some illustrated, of some of the most well-known mythologies of today. The collection includes Aesop's Fables and English fairy tales, as well as many Greek, Latin and even Oriental parables. Also included is criticism and interpretation on the subject.
++++

The below data was compiled from various identification fields in the bibliographic record of this title. This data is provided as an additional tool in helping to insure edition identification:

++++
Aesopi phrygis fabulae jam recenter ex collatione optimorum exemplarium emendatiùs excusae. Unà cum nonnullis variorum authorum fabulis adjectis. Et indice correctiori praefixo.
Aesop's fables. Latin.
Aesopi fabulae
Anon.
Includes index.
[16], 176 p.
Oxoniae, : Excudebat A. Lichfield, & H. Hall, acad. typog.,
Wing (2nd ed.), / A716A
Latin
Reproduction of the original in the Boston Public Library (Boston, Mass.)
++++
This book represents an authentic reproduction of the text as printed by the original publisher. While we have attempted to accurately maintain the integrity of the original work, there are sometimes problems with the original work or the micro-film from which the books were digitized. This can result in errors in reproduction. Possible imperfections include missing and blurred pages, poor pictures, markings and other reproduction issues beyond our control. Because this work is culturally important, we have made it available as part of our commitment to protecting, preserving and promoting the world's literature.