Artículos relacionados a Private anecdotes of foreign courts, by the author...

Solari, Catherine Govion Broglio Private anecdotes of foreign courts, by the author of 'Memoirs of the princesse de Lamballe'; to which are subjoined, memoirs extr. from the ... the French court by the prefect of Volume 1

Private anecdotes of foreign courts, by the author of 'Memoirs of the princesse de Lamballe'; to which are subjoined, memoirs extr. from the ... the French court by the prefect of Volume 1 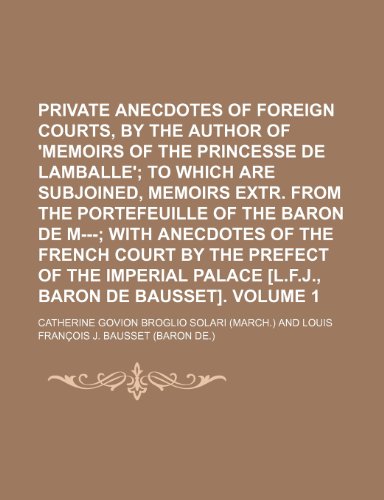 This historic book may have numerous typos and missing text. Purchasers can download a free scanned copy of the original book (without typos) from the publisher. Not indexed. Not illustrated. 1827 edition. Excerpt: ... Origin of the marriage of the Princess Sophia of Anhaltzerbst, afterwards Catherine II. to Peter III.--Intrigues of the Princess Anhaltzerbst to secure the match for her daughter.--Friendly conduct of Elizabeth.--The negotiation aided by Frederick the Great.--Mutual attachment of Peter and the Princess Sophia--Sudden malady of the former.--Its effects.--Dissimulation of Catherine.--The marriage takes place.--Prudent conduct of Catherine.--The arrogance and intrigues of the Princess of Anhalt causes her banishment from Russia--The first amour of Catherine with Saltikoff.--Amusements at Peterhoff--Declaration of Saltikoff.--His departure to, and return from Moscow.--Address and presence of mind of Catherine.--Her interview with the Empress.--Confidence restored on the part of Elizabeth and the Grand-duke. I Introduce my Anecdotes by several curious particulars relative to the intrigues, private VOL. I. B and political, of the Court of Russia, at which I was for some time resident. All Europe has been deceived as to the real cause of the matrimonial alliance which took place between Peter the Third, while he was Grand-duke, and the Princess Sophia of Anhaltzerbst. It has been attributed to the great influence which Frederick, King of Prussia, exercised over the mind of Peter. That the Prussian monarch was anxious for their union there is no doubt; yet it will be proved that this marriage, which originated in a sentiment of mutual affection, almost conceived at first sight by both parties, and which ended so tragically to the one, and triumphantly to the other, did not, as some writers have asserted, take place in consequence of the supposed intrigues of Frederick. The truth is, that the Empress Elizabeth, long before she had been raised to the...