Artículos relacionados a The Adolescent Experience: European and American Adolescents...

The Adolescent Experience: European and American Adolescents in the 1990s (Research Monographs in Adolescence Series) 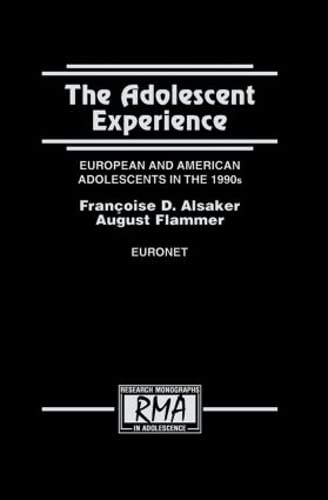 The opening of the borders to Eastern Europe has expanded our view on European diversities and offered new opportunities to examine the effects of the heterogeneity in European cultural backgrounds and political systems on personality and social development. This book is a first step in utilizing the rich cultural resource offered by the large number of cultural units represented in Europe and--at least in part--in the United States.

One way to understand the life conditions of adolescents in different countries is to study what they actually do in everyday life and how much time they spend on what types of activities. This book also provides essential and new information about individual and societal priorities and values. Toward this end, the "Euronet" scientists set up a postdoctoral training workshop on adolescent psychology for 10 selected American and 10 selected European participants.

The Euronet project comprises 13 different samples--six stemming from Middle and Eastern European countries (Bulgaria, the Czechoslovakian Federal Republic, Hungary, Poland, Russia, and Romania), six from Western European countries (Finland, France, Germany, Norway, French, and German Switzerland), and one from the United States (Michigan). This book reports the results of this large, cross-national, longitudinal study of adolescents and the world(s) in which they live, and is offered to all those who have an interest in adolescence and/or the diversity of Europe. Readers will learn about hundreds of features of adolescence which are more or less characteristic of the cultures, ages, and genders.

1. The Adolescent Experience: European and American Adolescents in the 1990s

3. The Adolescent Experience: European and American Adolescents in the 1990s