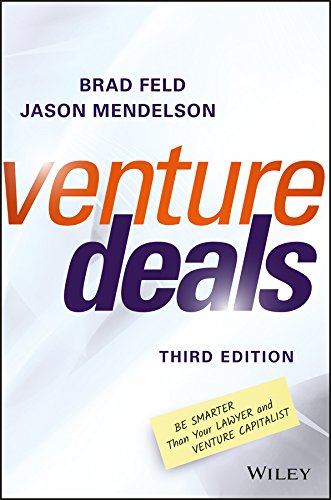 "When I was a founder, VCs hoarded information about how venture capital terms worked to stack the deck in their favor. Along came Brad Feld and Jason Mendelson who started giving away the game by publishing how things worked on their blog. Now you can have all this information provided in an easy and concise format that evens the playing field." - Mark Suster, General Partner, Upfront Ventures "Ventures Deals has historically been our go to book for entrepreneurs on fund raising. It is a must read for anyone who is embarking on the fundraising process and now we are delighted that it has been updated for the current fundraising environment with all the changes that have happened the past few years." - Bill Aulet, Managing Director, Martin Trust Center for MIT Entrepreneurship "Having worked with Brad and Jason during the Internet bubble, I witnessed first-hand the experience they gained by doing deals that covered the entire range of issues an entrepreneur faces today. This is a must-read for both entrepreneurs and investors as it lets each side understand the terminology, structures and potential issues inherent in venture deals so they can focus on what really matters, regardless of which side they are on. Every entrepreneur who is raising or considering raising venture capital should read this book!" - Heidi Roizen, Operating Partner, DFJ "Feld and Mendelson pack a graduate-level course into this energetic and accessible book. The authors' frank style and incisive insight make this a must-read for high-growth company entrepreneurs, early-stage investors, and graduate students. Start here if you want to understand venture capital deal structure and strategies. I enthusiastically recommend." - Brad Bernthal, CU Boulder, Associate Clinical Professor of Law, Technology Policy, Entrepreneurial Law "Brad and Jason are undoubtedly among the most authentic VCs in the industry today. This book goes far beyond the nuts and bolts of term sheets and venture capital to give invaluable insights into the importance of building relationships based on trust. I'll definitely be recommending this book to all Kauffman Fellows and to every entrepreneur I meet across the world." - Jeff Harbach, President and CEO, Kauffman Fellows "I have been lucky to have Brad Feld as a mentor as a VC, and watch him advise companies as a board member. Venture Deals is your chance to get some of that advice and wisdom applied to your own startup. Don't miss the opportunity." - Jeff Clavier, Managing Partner, SoftTech VC "One of the most practical books on venture capital. Every entrepreneur (and their lawyer) should own a copy" - Mike Platt, Colorado Partner-in-Charge Â Cooley LLP "We've worked with Brad & Jason through the highs and lows and highs of a number technology investments. When risk takers share insight, read it. In the case of Brad and Jason, read it twice. We love their refreshing comfort with maximizing risk in the spirit of creating meaningful impact." - Tony Conrad, founder / CEO, About.me and Partner, True Ventures "Even if your lawyer or VC has done a lot of deals, you should read this book. Nothing hurts a company more than a bad deal structure usually not discovered until a year or two later. This will allow you to look for the pot holes and avoid a lot of pain." - Lesa Mitchell, Managing Director, Techstars Kansas City "My biggest nightmare is taking advantage of an entrepreneur without even realizing it. It happens because VCs are experts in financings and most entrepreneurs are not. Brad and Jason are out to fix that problem with Venture Deals. This book is long overdue and badly needed." - Fred Wilson, Managing Partner, Union Square Ventures "A must-read book for entrepreneurs. Brad and Jason demystify the overly complex world of term sheets and M&A, cutting through the legalese and focusing on what really matters. That's a good thing not just for entrepreneurs, but also for venture capitalists, angels, and lawyers. Having an educated entrepreneur on the other side of the table means you spend your time negotiating the important issues and ultimately get to the right deal faster." - Greg Gottesman, Managing Director, Madrona Venture Group "Venture Deals is a must-read for any entrepreneur contemplating or currently leading a venture-backed company. Brad and Jason are highly respected investors who shoot straight from the hip and tell it like it is, bringing a level of transparency to a process that is rarely well understood. It's like having a venture capitalist as a best friend who is looking out for your best interests and happy to answer all of your questions." - Emily Mendell, Vice President of Communications, National Venture Capital Association

Get the inside scoop on what venture capitalists want to see in your startup as you hit the fundraising trail. This is the highly anticipated third edition of the best-selling book which has become the definitive resource for understanding venture capital fundraising. Whether you are an entrepreneur, lawyer, student or just have an interest in the venture capital ecosystem, Venture Deals is for you. The book dives deeply into how deals are constructed, why certain terms matter (and others don t), and more importantly, what motivates venture capitalists to propose certain outcomes. You ll see the process of negotiating from the eyes of two seasoned venture capitalists who have over 40 years of investing experience as VCs, LPs, angels, and founders. They will teach you how to develop a fundraising strategy that will be a win for all parties involved. This book is designed to bring transparency to the venture capital funding process and includes such topics as: * How to raise money; * What terms matter and which ones don t; * How to negotiate a fair deal for everyone; * What makes venture capitalists tick, including how they are compensated and motivated; * How companies are valued by venture capitalists; * How all current structures of funding work, including convertible debt, crowdfunding, pre-sales and other non-traditional methods; * How these particular issues change through different stages of financing (seed, early, mid and late); and * How to avoid business and legal pitfalls that many entrepreneurs make. And as in the previous editions, this book isn t just a one-sided opinion from venture capitalists, but also has helpful commentary throughout from a veteran CEO who has raised many rounds of financing from many different investors. If you are ready to learn all the secrets and ins and outs of fundraising, Venture Deals is an essential read.

2. Venture Deals: Be Smarter Than Your Lawyer and Venture Capitalist

3. Venture Deals: Be Smarter Than Your Lawyer and Venture Capitalist

4. Venture Deals: Be Smarter Than Your Lawyer and Venture Capitalist