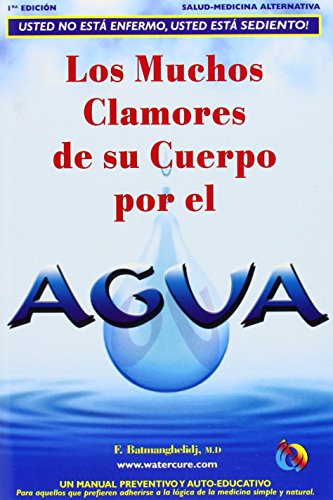 Los Muchos Clamores de su Cuerpo por el Agua Usted no Esta Enfermo, Usted Esta Seciento! F. Batmanghelidj, M.D.ISBN: 0-9702458-3-1 Price: $15.00 Spanish edition of Your Body’s Many Cries for Water By Dr. F Batmanghelidj An absolute must-read classic book on natural health. This groundbreaking book is the first of Dr. B's You're Not Sick, You're Thirsty series of books. It introduces a new paradigm for preventing and treating many degenerative diseases. This self-help book reveals the new knowledge of the amazing health values of natural, simple water in maintaining personal health.You will learn how to use water to: · Prevent and reverse premature aging · Eliminate pains including heartburn, back pain, arthritis, colitis pain, anginal pain, migraine headaches · Help cure asthma in a few days, naturally and forever · Lose weight naturally, without strict dieting “The water principle has a convincing logic that turns much of current medical practices on its head” The European, London, England “When Dr. Batmanghelidj thinks of a glass of water, he doesn’t think of it as half full or half empty. He thinks of it as brimming over with the essential fluid of life. He thinks of it as the solvent of all our ills and the deliverer of ripe old age. He thinks of it as the wave of the future.” The Washington Times “One man’s solution to soaring health costs: water” Paul Harvey, ABC News

Fereydoon Batmanghelidj, M.D.Fereydoon Batmanghelidj, M.D., an internationally renowned researcher, author and advocate of the natural healing power of water, was born in Iran in 1931. He attended Fettes College in Scotland and was a graduate of St. Mary’s Hospital Medical School of London University, where he studied under Sir Alexander Fleming, who shared the Nobel Prize for the discovery of penicillin.Dr. Batmanghelidj practiced medicine in the United Kingdom before returning to Iran where he played a key role in the development of hospitals and medical centers. He also helped establish sport projects for youth in Iran, including The Ice Palace in Tehran, the first ice skating and sports complex in the Middle East.When the Iranian Revolution broke out in 1979, Dr. Batmanghelidj was placed in the infamous Evin Prison as a political prisoner for two years and seven months. It was there he discovered the healing powers of water. One night, Dr. B. had to treat a fellow prisoner with crippling peptic ulcer pain. With no medications at his disposal, Dr. B. gave him two glasses of water. Within eight minutes, his pain disappeared. He was instructed to drink two glasses of water every three hours and became absolutely pain free for his four remaining months in the prison. Dr. B. successfully treated 3,000 fellow prisoners suffering from stress-induced peptic ulcer disease with water alone. While in prison he conducted extensive research into the medicinal effects of water in preventing and relieving many painful degenerative diseases. Evin proved an ideal “stress laboratory,” and despite his being offered an earlier release, Dr. B. chose to stay an extra four months in prison to complete his research into the relationship of dehydration and bleeding peptic ulcer disease. The report of his findings was published as the editorial of the Journal of Clinical Gastroenterology in June 1983. The New York Times Science Watch reported this discovery on June 21, 1983.On his release from prison in 1982, Dr. Batmanghelidj escaped from Iran and came to America. At the Foundation for the Simple in Medicine he began to research the effect of chronic unintentional dehydration on the human body. His findings were published in the Foundation’s “Journal of Science in Medicine Simplified” in 1991 and 1992. They can be read on the web site www.watercure.com.Dr. F. Batmanghelidj wrote his first self-help book “Your Body’s Many Cries for Water” in 1992, in which he stated that a dry mouth is not a reliable indicator of dehydration. The body signals its water shortage by producing pain. Dehydration actually produces pain and many degenerative diseases, including asthma, arthritis, hypertension, angina, adult-onset diabetes, lupus and multiple sclerosis. Dr. B’s message to the world is, “You are not sick, you are thirsty. Don’t treat thirst with medication.” Dr. F. Batmanghelidj devoted the last 20 years of his life promoting public awareness of the healing powers of water. He appeared on hundreds of radio and television programs and lectured around the world. He has left a body of valuable works of six books and more than a dozen educational audio and video seminars. His work has created an international community that has embraced the natural healing of the water cure. His ground-breaking book “Your Body’s Many Cries for Water” has been translated into 15 languages and continues to inspire readers all over the world.Dr. F. Batmanghelidj died of complications from pneumonia on November 15, 2004, in Virginia, U.S.A. He was 73.