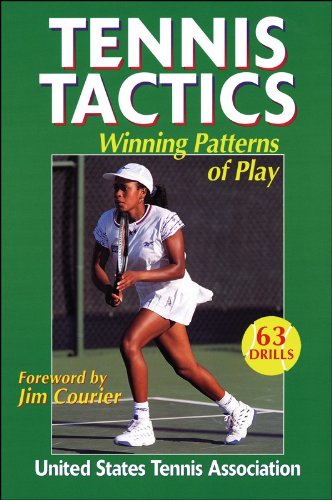 " """Play like a pro! "Tennis Tactics" brings you the perfect blend of the mental and physical aspects of the game. Learn the strategies and how to practice them, then see the results when you compete.""" Todd Martin Professional Tennis Player """Winning matches depends on the ability to think fast. This book helps you put together patterns and strategies to do just that.""" Lindsay Davenport Professional Tennis Player Women's Tennis Association "

Match point. Your opponent hits a deep-sliced approach shot to your backhand. To neutralize this attack and regain control of the point, you retaliate with a crosscourt passing shot, low with topspin. Your opponent is forced to return a weak volley to the open court, and you win the point with a passing shot down the line. Game, set, and match. This is just one of the many winning strategies you'll find in Tennis Tactics: Winning Patterns of Play. It's the first book to break down what shots to make and when to make them. You'll learn how to plan your shot selection in competition and put yourself in the best possible position to win every point. Based on an extensive USTA study of actual tournament play by the game's top athletes, Tennis Tactics describes 58 patterns--repeated shot sequences--that will emphasize your strengths and exploit your opponents' weaknesses. It contains 63 drills that show you how to practice the patterns and make them part of your routine during match play. Competitive players, coaches, and instructors will love the book's simple approach for practice and play. Tennis Tactics reviews sound, time-tested strategic principles, then explains how they apply to patterns of play. You'll learn how to choose patterns that fit your style of play, whether you're an all-court player, a counterpuncher, an aggressive baseliner, or a serve-and-volleyer. Next, the book provides strategies and tactics for different areas of the court. You'll learn how to execute 58 patterns for - backcourt (26), - midcourt (8), - net play (8), and - defensive play (16). For each pattern, the book describes and illustrates corresponding practice drills that will help you get an edge on the competition. A Pattern Finder chart helps you quickly locate the shot combinations you want to study and incorporate into your game. Make your practice sessions pay off in competition by using the drills and mastering the patterns in Tennis Tactics: Winning Patterns of Play.