Artículos relacionados a The Lord Is My Song: Book 2 (Chronicles of the King)

Austin, Lynn N. The Lord Is My Song: Book 2 (Chronicles of the King)

The Lord Is My Song: Book 2 (Chronicles of the King) 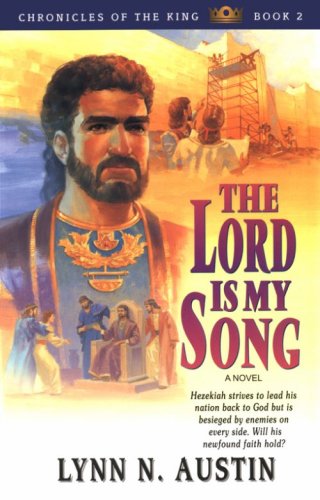 With a newfound faith in the one true God, King Hezekiah leads his nation into reform and revival, bringing God's blessings and renewed prosperity. But not every member of his court is pleased with the king's 'religious fanaticism.' And when Hezekiah stops paying tribute to Assyria, opposition to his leadership mounts. As Hezekiah seeks to obey God in every aspect of his life, he discovers that the Law forbids him to take multiple wives. He chooses Hephzibah. Their God-given love flourishes, but even here Hezekiah's faith will be severely tested. The king's precarious hold on the throne of Judah reaches critical proportions when the Assyrians invade the northern nation of Israel. A holocaust ensues, inciting ever closer to Judah and Jerusalem. One Israelite family escapes to Judah, including the young woman who just might carry the critical information Hezekiah needs to augment Jerusalem's defense. But with the Assyrians on the march, and his fortifications no match for their strength, can anyone really help? Paper.

Lynn N. Austin is a full-time freelance writer and speaker. With her husband, Ken--a Christian musician who has performed with 'Truth, ' Sandi Patti, Steve Green, Bill Gaither, and others--Lynn has lived and worked in Bogota, Colombia; Ontario and Manitoba, Canada; and several states throughout the United States. The Austins currently reside in Orland Park, Illinois, with their three children. Lynn is a contributing editor for The Christian Reader and editor of Profile, the journal of the Chicago Women's Conference. Lynn received her bachelor of arts degree from Southern Connecticut State University and has completed graduate work in biblical backgrounds and archaeology through Hebrew University and Southwestern Baptist Theological Seminary. She and her son spent a summer in Israel participating in an archaeological dig at the biblical city of Timnah. Lynn's articles have appeared in Moody magazine, Parents of Teenagers, The Christian Reader, The Lookout, Teen Power, Discipleship Journal, and Teachers in Focus, for which she has written on assignment. Lynn was named the 1993 'New Writer of the Year' at Moody Bible Institute's Write-to-Publish Conference.

3. The Lord is My Song (Chronicles of the King #2) [Paperback] Lynn Austin