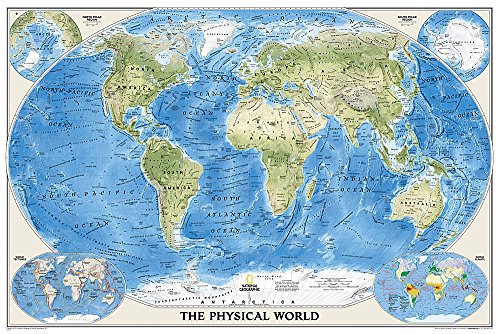 National Geographic's The Physical World map highlights the Earth's land and undersea forms with exquisite hand-painted relief. Drawn in the Winkel Tripel projection, distortions are minimized and unlike many other World maps, Greenland is show the same size as Argentina and not as the size of all of South America. Two corner inset maps show the Earth's crust and world climatic zones.

The map is encapsulated in heavy-duty 1.6 mil laminate which makes the paper much more durable and resistant to the swelling and shrinking caused by changes in humidity. Laminated maps can be framed without the need for glass, so the fames can be much lighter and less expensive.