Artículos relacionados a The African Queen 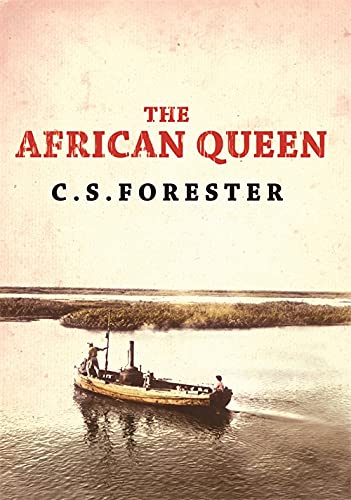 A classic tale of love and adventure from the author of the Captain Hornblower series.

The film adaptation, which starred Katharine Hepburn and Humphrey Bogart, became one of the most popular films ever made.

The African Queen is an old, dirty, ugly, unreliable steamboat - not the kind of boat anyone would take down a dangerous river through the jungles of Central Africa. But Rose Sayer and Charlie Allnut do just that.

Why do they do it? The First World War has just begun, and Rose has a crazy plan. She and Charlie set off down the river and come close to death many times, but they survive all dangers - except the danger of falling in love.

Cecil Scott Forester was born in 1899 in Cairo and educated in England. He went to Hollywood during the opening years of World War II to help write and produce 'propaganda' films that would convince U.S. filmgoers that the they should take the side of the British and Allies in the War, which led to such films as Eagle Squadron (1941). He is most famous for his celebrated Hornblower series. He died in 1966.

Descripción Condición: Good. A+ Customer service! Satisfaction Guaranteed! Book is in Used-Good condition. Pages and cover are clean and intact. Used items may not include supplementary materials such as CDs or access codes. May show signs of minor shelf wear and contain limited notes and highlighting. Nş de ref. del artículo: 075382079X-2-4

Descripción Paperback. Condición: Very Good. The book has been read, but is in excellent condition. Pages are intact and not marred by notes or highlighting. The spine remains undamaged. Nş de ref. del artículo: GOR001473885

Descripción Paperback. Condición: Good. The book has been read but remains in clean condition. All pages are intact and the cover is intact. Some minor wear to the spine. Nş de ref. del artículo: GOR001572949

Descripción Paperback. Condición: Good. A slight tan to page edges Good condition is defined as: a copy that has been read but remains in clean condition. All of the pages are intact and the cover is intact and the spine may show signs of wear. The book may have minor markings which are not specifically mentioned. Most items will be dispatched the same or the next working day. Nş de ref. del artículo: wbb0017452429

Descripción Paperback. Condición: Very Good. Item is in very good condition. If supplemental codes/CDs for textbooks are required please contact us prior to purchasing as they may be missing. Photos are stock pictures and not of the actual item. Nş de ref. del artículo: DS-075382079X-2