Artículos relacionados a Wouldn't it be Nice: My Own Story

Wilson, Brian Wouldn't it be Nice: My Own Story 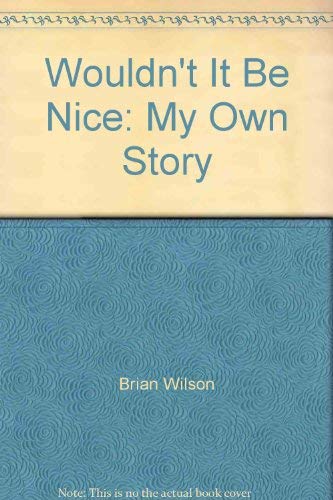 Brian Wilson was the creative genius behind the Beach Boys. He turned a suburban California garage band into a group that took the world by storm with the sound of his songs, including such classics as "Good Vibrations", "California Girls" and "God Only Knows". Brian, Dennis, Carl, Mike and Al were the free-wheeling good-time guys who personified the laid-back, sunny southern California lifestyle. They were the most popular rock group in the world. But the cheerful image belied what was really going on. For the first time, in this long-awaited, no-holds-barred autobiography, Wilson describes his 20 year nightmare of drug addiction, alcoholism, obesity and mental illness. He spent 3 years alone in his room. He lost his family. And he early lost his life. Only Brian Wilson can tell the truth behind the rumours and myths about his complex and fascinating life. "Wouldn't It Be Nice" is filled with shocking revelations about his violent father's abuse of him as a child; the bitter infighting among the Beach Boys, which continues to this day; the death of his beloved brother and drug partner Dennis; and the controversies surrounding Dr Eugene Landy, the psychotherapist whom Brian credits with literally saving his life.

Descripción Hardback. Condición: Very Good. The book has been read, but is in excellent condition. Pages are intact and not marred by notes or highlighting. The spine remains undamaged. Nş de ref. del artículo: GOR002115846

Descripción Hardcover. Condición: Good. Estado de la sobrecubierta: Includes dust jacket. Good Clean Condition Book. The dust jacket has some tears. Good condition is defined as: a copy that has been read but remains in clean condition. All of the pages are intact and the cover is intact and the spine may show signs of wear. The book may have minor markings which are not specifically mentioned. Most items will be dispatched the same or the next working day. Nş de ref. del artículo: mon0017411842

Descripción Hardcover. Condición: Used; Good. **Simply Brit** Shipped with Premium postal service within 24 hours from the UK with impressive delivery time. We have dispatched from our book depository; items of good condition to over ten million satisfied customers worldwide. We are committed to providing you with reliable and efficient service at all times. Nş de ref. del artículo: BB00259738B