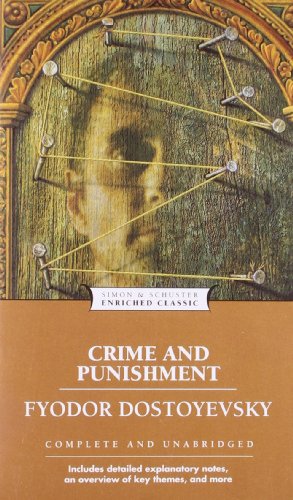 ENDURING LITERATURE ILLUMINATED BY PRACTICAL SCHOLARSHIP Dostoyevsky's penetrating study of a man for whom the distinction between right and wrong disappears, and a riveting portrait of guilt and retribution. EACH ENRICHED CLASSIC EDITION INCLUDES: A concise introduction that gives readers important background information A chronology of the author's life and work A timeline of significant events that provides the book's historical context An outline of key themes and plot points to help readers form their own interpretations Detailed explanatory notes Critical analysis, including contemporary and modern perspectives on the work Discussion questions to promote lively classroom and book group interaction A list of recommended related books and films to broaden the reader's experience Enriched Classics offer readers affordable editions of great works of literature enhanced by helpful notes and insightful commentary. The scholarship provided in Enriched Classics enables readers to appreciate, understand, and enjoy the world's finest books to their full potential. SERIES EDITED BY CYNTHIA BRANTLEY JOHNSON

Fyodor Dostoyevsky (1821-1881) was born in Moscow, as the second son of a former army doctor. In 1846 he joined a group of utopian socialists. He was arrested in 1849 during a reading of a radical letter, and sentenced to death. He spent four years in a convict prison in Siberia, after which he was obliged to enlist in the army. Dostoyevsky's own harrowing experiences were the inspiration for the novel Crime and Punishment.