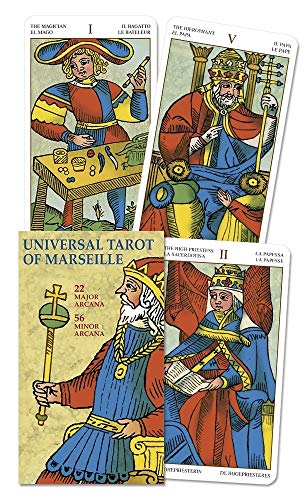 The Universal Marseille Tarot takes us directly to the origin of tarot. The highly sought-after deck by Claude Burdel (1727-1799), originally rich with divinatory suggestion, has been beautifully restored-giving new energy to the ancient images and amplifying their symbolic meaning.

The companion booklets for most Lo Scarabeo decks are in five languages: English, Spanish, French, Italian, and German.

Lo Scarabeo's Tarot decks have been acclaimed all over the world for originality and quality. With the best Italian and international artists, each Lo Scarabeo deck is an exceptional artistic value.

Commited to developing innovative new decks while preserving the rich tradition of Tarot, Lo Scarabeo continues to be a favorite among collectors and readers.

Llewellyn is the exclusive distributor of Lo Scarabeo products in North America.