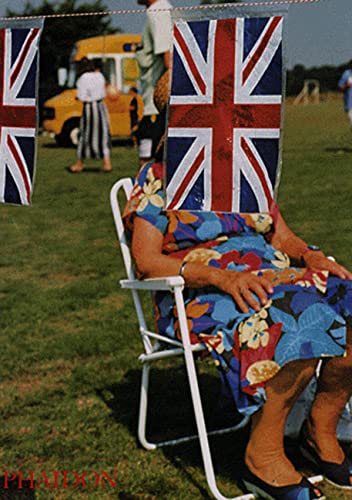 "An accessible and funny study into the soul-searching debate about the very nature of Englishness."-Pride of Britain "Parr provides the definitive picture of English egg-and-chintz."-British Journal of Photography "An affectionately satirical study of the English identity... The effect is both reassuring and disturbing."-Daily Telegraph "100 colour images... that transform the kitsch, the cliched and the common into the sublime."-Evening Standard "A wryly ambivalent amble through the commonplaces of his home country."-New York Times "Zeroing in on the abundant cliches of his green and pleasant land and pushing them as far as they'll go."-The Wall Street Journal "Uses supersaturated colors and a satirical eye to paint a portrait of his motherland that is both comical and despairing."-American Photo

England has been a key subject of Magnum photographer Martin Parr's work since he started taking pictures. Think of England is a comic, opinionated, affectionately satirical, colour-saturated photo-essay about the identity of England. As Scotland and Wales consolidate their status as nations and Great Britain begins to unravel, this book of new work contributes to the debate about what it means to be English. Quintessentially English himself, Parr's great achievement as a photographer is his ability to transform the obvious into the surprising, reinventing cliches of Englishness as provocative revelations. His tour of obvious England takes in Ascot and the charity shop, seaside resorts, herbaceous borders, the bring-and-buy stall, cucumber sandwiches and cups of tea, baked beans and bad footwear. Parr's work has already added to the visual vocabulary of England; this book, his first specifically on the subject of England, stretches it further. Simultaneously affectionate and brutally direct, all the photographs are shot with a ring flash camera (more usually used for medical photographs), which has been his medium of choice for the last four years.