Artículos relacionados a City of Capital: Politics and Markets in the English...

City of Capital: Politics and Markets in the English Financial Revolution 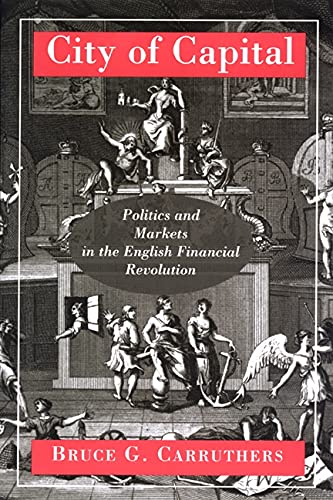 "City of Capital is the new economic sociology at its best--theoretically sophisticated, empirically rich, and lucidly written."--William G. Roy, American Journal of Sociology

"A fabulous book. The arguments about its broad themes are compelling, the attention to detail is overwhelming but absolutely necessary and the lessons drawn are important."--Ruben Lee, Financial News

"By demonstrating that in this crucial period, in this crucial market, politics affected 'economic' behavior, Carruthers poses important questions for sociologists and economists. There is plenty here for historians, too. His reflections on the social meaning of debt relations and of economic exchange, for example, have wider implications for our understanding of the early modern economy."--Michael Braddick, American Historical Review

While many have examined how economic interests motivate political action, Bruce Carruthers explores the reverse relationship by focusing on how political interests shape a market. He sets his inquiry within the context of late Stuart England, when an active stock market emerged and when Whig and Tory parties vied for control of a newly empowered Parliament. Carruthers examines the institutional linkage between politics and the market that consisted of three joint-stock companies--the Bank of England, the East India Company, and the South Sea Company--which all loaned large sums to the government and whose shares dominated trading on the stock market. Through innovative research that connects the voting behavior of individuals in parliamentary elections with their economic behavior in the stock market, Carruthers demonstrates that party conflict figured prominently during the company foundings as Whigs and Tories tried to dominate company directorships. For them, the national debt was as much a political as a fiscal instrument.

In 1712, the Bank was largely controlled by the Whigs, and the South Sea Company by the Tories. The two parties competed, however, for control of the East India Company, and so Whigs tended to trade shares only with Whigs, and Tories with Tories. Probing such connections between politics and markets at both institutional and individual levels, Carruthers ultimately argues that competitive markets are not inherently apolitical spheres guided by economic interest but rather ongoing creations of social actors pursuing multiple goals.

1. City of Capital. Politics and Markets in the English Financial Revolution

2. City of Capital: Politics and Markets in the English Financial Revolution

Descripción Princeton University Press, 1996. Condición: Fair. This is an ex-library book and may have the usual library/used-book markings inside.This book has hardback covers. In fair condition, suitable as a study copy. No dust jacket. Please note the Image in this listing is a stock photo and may not match the covers of the actual item,350grams, ISBN:0691044554. Nş de ref. del artículo: 6499733

3. City of Capital: Politics and Markets in the English Financial Revolution

Descripción Princeton University Press, 1996. Hardcover. Condición: Good. Good condition is defined as: a copy that has been read but remains in clean condition. All of the pages are intact and the cover is intact and the spine may show signs of wear. The book may have minor markings which are not specifically mentioned. Most items will be dispatched the same or the next working day. Nş de ref. del artículo: mon0012062270

4. City of Capital: Politics and Markets in the English Financial Revolution

Descripción Princeton University Press, 1996. Hardcover. Condición: GOOD. Has little wear to the cover and pages. Contains some markings such as highlighting and writing. Supplemental materials are not guaranteed with any used book purchases. Nş de ref. del artículo: 0691044554_abe_gd