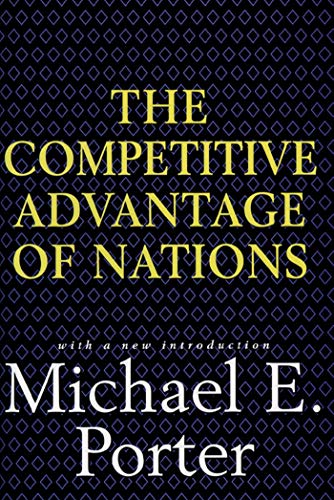 Publishers Weekly This massive, impressive, salient tome is structured so that business executives, economists, policy-makers and ordinary readers can turn to the sections most relevant to their needs. Journal of Development Economics The first serious attempt to develop a really original grand theory of national economic development processes since the early years of Postwar development economics, and one of the most original ways of thinking about development policy in years. Business in a Contemporary World The Competitive Advantage of Nations is destined to become a classic in its field. Administrative Science Quarterly Should have a profound and far-reaching impact on academic course work, managers' perceptions, and public policy. The Economist An all-embracing view of economic change that amounts in the end to a powerful analytic framework. Porter has done for international capitalism what Marx did for the class struggle....A real achievement. Business Week Rich in lessons about why and how industries, regions, and nations succeed or fail.

Now beyond its eleventh printing and translated into twelve languages, Michael Porter's The Competitive Advantage of Nations has changed completely our conception of how prosperity is created and sustained in the modern global economy. Porter's groundbreaking study of international competitiveness has shaped national policy in countries around the world. It has also transformed thinking and action in states, cities, companies, and even entire regions such as Central America. Based on research in ten leading trading nations, The Competitive Advantage of Nations offers the first theory of competitiveness based on the causes of the productivity with which companies compete. Porter shows how traditional comparative advantages such as natural resources and pools of labor have been superseded as sources of prosperity, and how broad macroeconomic accounts of competitiveness are insufficient. The book introduces Porter's "diamond," a whole new way to understand the competitive position of a nation (or other locations) in global competition that is now an integral part of international business thinking. Porter's concept of "clusters," or groups of interconnected firms, suppliers, related industries, and institutions that arise in particular locations, has become a new way for companies and governments to think about economies, assess the competitive advantage of locations, and set public policy. Even before publication of the book, Porter's theory had guided national reassessments in New Zealand and elsewhere. His ideas and personal involvement have shaped strategy in countries as diverse as the Netherlands, Portugal, Taiwan, Costa Rica, and India, and regions such as Massachusetts, California, and the Basque country. Hundreds of cluster initiatives have flourished throughout the world. In an era of intensifying global competition, this pathbreaking book on the new wealth of nations has become the standard by which all future work must be measured.