Artículos relacionados a A Midwife's Tale: The Life of Martha Ballard, Based...

Ulrich, Laurel Thatcher A Midwife's Tale: The Life of Martha Ballard, Based on Her Diary, 1785-1812 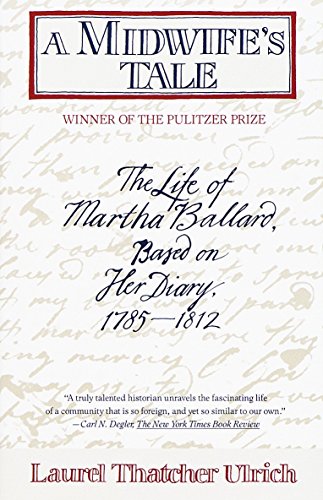 "A truly talented historian unravels the fascinating life of a community that is so foreign, and yet so similar to our own." --The New York Times Book Review

"Expertly executed and endlessly interesting. An offbeat gem of scholarship." --Washington Post Book World "A marvelously nuanced, subtle, and unillusioned portrayal of one woman's life in early America. It has the makings of a classic." --Stephen Innes, University of Virginia "It takes a historian of extraordinary persistence, skill, and empathy to recognized [Martha Ballard's] diary as something of a buried treasure and to painstakingly unearth its gems. . . . Ulrich has recognized Ballard's great spirit, and has given to us the gift of a life worth knowing." --Philadelphia Inquirer Reseńa del editor:

WINNER OF THE PULITZER PRIZE

Drawing on the diaries of one woman in eighteenth-century Maine, this intimate history illuminates the medical practices, household economies, religious rivalries, and sexual mores of the New England frontier.

Between 1785 and 1812 a midwife and healer named Martha Ballard kept a diary that recorded her arduous work (in 27 years she attended 816 births) as well as her domestic life in Hallowell, Maine. On the basis of that diary, Laurel Thatcher Ulrich gives us an intimate and densely imagined portrait, not only of the industrious and reticent Martha Ballard but of her society. At once lively and impeccably scholarly, A Midwife's Tale is a triumph of history on a human scale.

Descripción Vintage. PAPERBACK. Condición: New. 0679733760 Brand New! Not Overstocks or Low Quality Book Club Editions! Direct From the Publisher! We're not a giant, faceless warehouse organization! We're a small town bookstore that loves books and loves it's customers! Buy from us and you get great service as well as a great price! Your business is valued and your satisfaction is guaranteed!|VCF. Nş de ref. del artículo: OTF-S-9780679733768