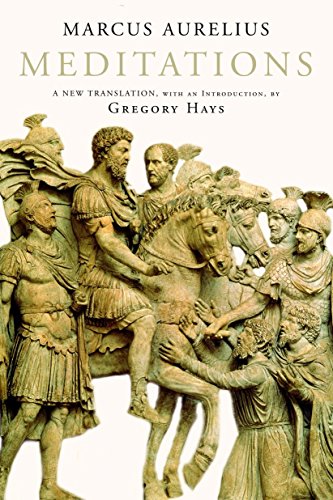 "The emperor Marcus Aurelius, the proverbial philosopher-king, produced in Greek a Roman manual of piety, the Meditations, whose impact has been felt for ages since. Here, for our age, is his great work presented in its entirety, strongly introduced and freshly, elegantly translated by Gregory Hays for the Modern Library."
--Robert Fagles

An incisive introduction to the life and times of the Roman philosopher and emperor, the fundamental principles and concepts of Stoicism, the recurring themes and structure of The Meditations, and the work's impact preface a new translation of the influential and admired journal. 25,000 first printing.

Descripción Random House USA Inc, United States, 2002. Hardback. Condición: New. Modern Library. Language: English. Brand new Book. Nearly two thousand years after it was written, Meditations remains profoundly relevant for anyone seeking to lead a meaningful life. Few ancient works have been as influential as the Meditations of Marcus Aurelius, philosopher and emperor of Rome (A.D. 161-180). A series of spiritual exercises filled with wisdom, practical guidance, and profound understanding of human behavior, it remains one of the greatest works of spiritual and ethical reflection ever written. Marcus's insights and advice--on everything from living in the world to coping with adversity and interacting with others--have made the Meditations required reading for statesmen and philosophers alike, while generations of ordinary readers have responded to the straightforward intimacy of his style. For anyone who struggles to reconcile the demands of leadership with a concern for personal integrity and spiritual well-being, the Meditations remains as relevant now as it was two thousand years ago. In Gregory Hays's new translation--the first in thirty-five years--Marcus's thoughts speak with a new immediacy. In fresh and unencumbered English, Hays vividly conveys the spareness and compression of the original Greek text. Never before have Marcus's insights been so directly and powerfully presented. With an Introduction that outlines Marcus's life and career, the essentials of Stoic doctrine, the style and construction of the Meditations, and the work's ongoing influence, this edition makes it possible to fully rediscover the thoughts of one of the most enlightened and intelligent leaders of any era. Nş de ref. del artículo: AAC9780679642602