Artículos relacionados a The Careful Use of Compliments (Isabel Dalhousie)

McCall Smith, Alexander The Careful Use of Compliments (Isabel Dalhousie)

The Careful Use of Compliments (Isabel Dalhousie) 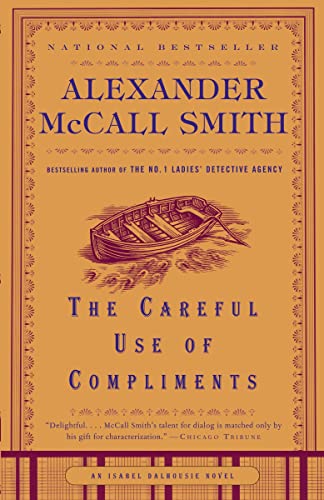 Full-time philosopher and occasional sleuth Isabel Dalhousie, now the mother of a baby boy, is getting used to the new rhythms of her life, caring for little Charlie with the sometimes unsettling aid of her forthright housekeeper, Grace, having dinners with Charlie’s father, Jamie, and tending as usual to submissions to the Review of Applied Ethics. But Isabel is deeply unsettled when she receives a letter telling her that she is soon to be replaced as editor of the Review by Christopher Dove, an ambitious academic at a London university, and she considers a variety of ways of dealing with this unwelcome news. And her niece, Cat, who a couple of years before had rejected Jamie and broken his heart, is now furious at Isabel for having stolen him away.

Isabel’s insatiable curiosity—or what Jamie sees as her tendency toward meddling—is peaked when she learns some odd details regarding two paintings by a Scottish artist that have come onto the auction market, and she begins to think that the paintings might be forgeries. Her investigation takes her to the beautiful Isle of Jura, where she finds some recent traces of the painter and learns of his apparent suicide in the fabled whirlpool called the Corryvreckan. A visit to the painter’s widow brings a surprising realization, one that contributes to her musings throughout the story on mothers, fathers, and sons.
From the Hardcover edition.

ALEXANDER MCCALL SMITH is the author of the international phenomenon The No. 1 Ladies' Detective Agency series, the Isabel Dalhousie Series, the Portuguese Irregular Verbs series, the 44 Scotland Street series and the Corduroy Mansions series. He is professor emeritus of medical law at the University of Edinburgh in Scotland and has served with many national and international organizations concerned with bioethics. He was born in what is now known as Zimbabwe and was a law professor at the University of Botswana.

1. The Careful Use of Compliments: Book 4 (The Isabel Dalhousie Series)

2. The Careful Use of Compliments: Book 4 (The Isabel Dalhousie Series) McCall Smith, Alexander