Artículos relacionados a Beauty Tips from Moose Jaw: Travels in Search of Canada... 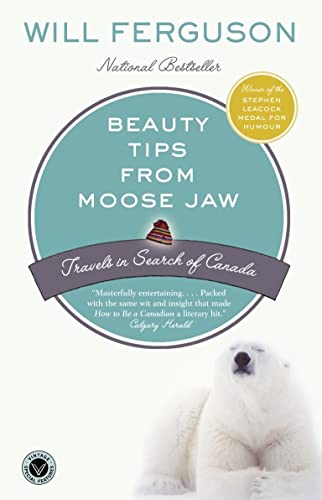 Book by Ferguson Will

"Yet another masterfully entertaining examination of Canuckishness penned by the Calgary author.... In each stop on this coast-to-coast travelogue, Ferguson sneakily wraps a local history lesson in a wickedly entertaining meander through obvious and obscure local landmarks.... Insightful and gag-filled.... Ferguson's fascination with Canadiana is infectious."
--The Calgary Herald

"Full of surprises... and idiosyncratic charms.... Travel writers don't always get to climb Everest or visit the Taj Mahal, and they can be judged best by what they come up with on a slow day. Ferguson is good when he's sipping a handful of icy water out of Hudson Bay; he's better eating pancakes in a Finnish restaurant in Thunder Bay.... Ferguson proves a companionable guide in Beauty Tips from Moose Jaw."
--National Post

"Will Ferguson is a talent. He writes refreshingly, provocatively and eloquently. He takes on issues from a contrarian's perspective, but never exceeds the bounds of reason. He looks for the essence and his search brings out some smashingly insightful stuff."
--Ottawa Citizen

"Ferguson's strength does not lie in whether he writes funny or not. His strength is that he writes so well."
--The Times-Colonist

"[Ferguson] delves into the soul of the cities he visits, sometimes climbing into helicopters, seaplanes and kayaks, and attending underground poetry slams."
--Airlines

"Ferguson takes readers on this quest for hidden gold in the best tradition of the true Canadian voyageur. He uncovers nuggets of hidden treasure in the stories of small towns and their resilient people. The landscape itself proves larger than life. He mixes the historical with the contemporary, adds a touch of humour and brings readers close to his subjects -- in a way that only he can manage. . . . For those of us who seek to know that place beyond the horizon, this is a great journey and a great read."
--The Costco Connection, Buyer's Pick "[Ferguson's] writing leaves nothing to be desired. It's got a kind of This Hour Has 22 Minutes shtick that generally has readers guffawing in public spaces. . . . His vast historical knowledge . . . adds intellectual credibility to what is already a hilarious read."
--Georgia Straight "You'll enjoy this book. . . .Ferguson [gives us] lively, thought-provoking riffs on Canadian culture. . . . Anyone who can spin a tale as well as Ferguson, while peppering it with trenchant and often humorous commentary on what it means to be a Canadian traveling through Canada, will easily grab and hold the reader's attention for the more than 300 pages that make up this book."
--Quill & Quire Praise for Will Ferguson:
"Will Ferguson is a talent. He writes refreshingly, provocatively and eloquently. He takes on issues from a contrarian's perspective, but never exceeds the bounds of reason. He looks for the essence and his search brings out some smashingly insightful stuff."
--Ottawa Citizen "The funniest writer in Canada."
--National Post "Ferguson possesses a crafty eye for detail, not to mention a highly developed understanding of the essential folly in what passes for everyday life."
--Edmonton Journal "Lively, knowledgeable, opinionated, disrespectful, debatable, and immensely readable."
--The Gazette (Montreal) Reseńa del editor:

Will Ferguson's first book in three years, following on the back-to-back successes of How to Be a Canadian (over 110,000 copies sold) and Happiness(TM) (Winner of the Leacock Medal for Humour).

Will Ferguson has spent the past three years criss-crossing Canada and back again. In a helicopter above the barrenlands of the sub-Arctic, in a canoe with his four-year-old son, aboard seaplanes and along the Underground Railroad, Will's travels have taken him from Cape Spear on the coast of Newfoundland to the sun-dappled streets of Olde Victoria. In his last book, Will told us how to be Canadian; now in this book, he will tell us what it means to be Canadian. And what Will finds out along the way is that Canada in its development and in its current state is really a series of outposts -- not only geographically but culturally. Will's journey takes him to far-flung isolated communities as well as deep into Canada's urban centres. From the "million-acre farm" that is P.E.I. to the tobacco belt of southern Ontario, from the architectural mess that is Montreal to the glorious jumble that is St. John's, from a renegade republic in northwestern New Brunswick to a tundra buggy in the polar bear migration paths of Hudson Bay, Will explodes the myths of who we are. Funny, poignant and insightful, Beauty Tips from Moose Jaw is a provocative tribute to our quirky and fascinating country. Excerpt from Beauty Tips from Moose Jaw
In one particular seedy St. John's pub, I was adopted by a work crew from Portugal Cove who took an immediate, almost antagonistic liking to me. "You're from Alberta, you say? I have a cousin in Fort McMurray, maybe you know him." (Everybody in Newfoundland has a cousin in Fort McMurray.) The crew from Portugal Cove tormented me with screech and second-hand smoke as they regaled me with tales of how their families were so poor "back when" that all they could afford to eat were lobsters. This was not the first time I had heard this. Apparently half the population of Newfoundland has subsisted on lobster at some point or other.. NOTA: El libro no está en español, sino en inglés.

1. Beauty Tips from Moose Jaw: Travels in Search of Canada

2. Beauty Tips from Moose Jaw: Travels in Search of Canada