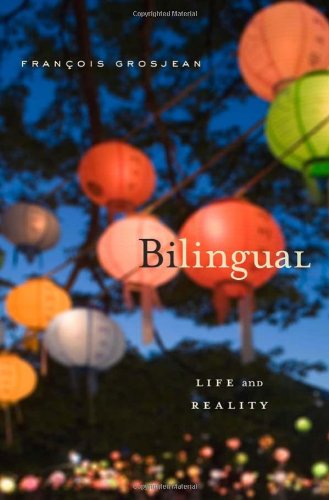 Grosjean shows that we still need to fight against the monolingual mindset that has long tended to categorize bilingual speakers as somehow "different" or unusual. Bilingual: Life and Reality is a useful and very readable contribution to that ongoing struggle...It is worth having at one's fingertips the unpretentiously presented, solidly researched facts and figures in this gentle, humorous, civilized book. -- Mela Sarkar Montreal Gazette 20100604 The personal dimension of the book contributes to its readability and vitality. Grosjean succeeds in impressing on his readers the need to demystify bilingualism and seek ways in which to encourage linguistic diversity. -- Kerstin Hoge Times Literary Supplement 20100716

Whether in family life, social interactions, or business negotiations, half the people in the world speak more than one language every day. Yet many myths persist about bilingualism and bilinguals. Does being bilingual mean you are equally fluent in two languages, or that you belong to two cultures, or even that you have multiple personalities? Can you become bilingual only as a child? Why do bilinguals switch from one language to another in mid-sentence? Will raising bilingual children confuse and delay their learning of any language? In a lively and often entertaining book, an international authority on bilingualism, son of an English mother and a French father, explores the many facets of bilingualism. In this book, Francois Grosjean draws on research, interviews, autobiographies, and the engaging examples of bilingual authors. He describes the various strategies - some useful, some not - used by parents raising bilingual children, explains how children easily pick up and forget languages, and considers how bilingualism affects the experience and expression of emotions, thoughts, and dreams. This book shows that speaking two or more languages is not a sign of intelligence, evasiveness, cultural alienation, or political disloyalty. For millions of people, it's simply a way of navigating the complexities of life.