Artículos relacionados a Lego Ninjago: Masters of Spinjitzu 9: Night of the...

Lego Ninjago: Masters of Spinjitzu 9: Night of the Nindroids 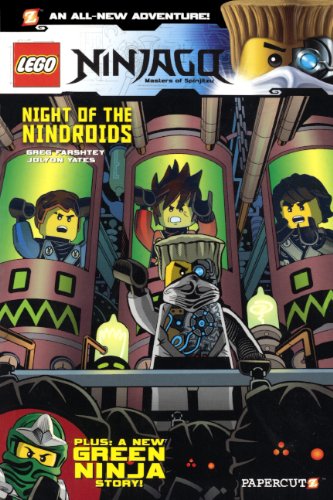 After the defeat of the Stone Warriors, Jay, Cole, Zane, and Kai have to regroup fast when an even greater challenge rises from the shadows. With their ranks divided against the most sinister, most unstoppable foe they have ever faced, the ninja must call upon everything they've learned from Sensei Wu . . . and more.

This is the one you've been waiting for! All-new high-kicking action from the world of Ninjago!

GREG FARSHTEY is the "New York Times"-bestselling author of over 50 novels and graphic novels. Prior to his work on LEGO NINJAGO, he was the main creative force behind the popular BIONICLE series. He lives in Connecticut with his daughter.

JOLYON YATES studied graphic design and illustration at Cambridge and Exeter, and Japanese arts in Sapporo, Japan. He lived in Japan for several years, during which time he contributed comics, articles, and illustrations to magazines such as "Anime FX." He illustrated the award-winning web comic "Revvelations, " and he has been a regular contributor to "G-Fan." He is very happy to be working on LEGO NINJAGO but fears losing the ability to draw fingers, ears, and noses.

1. Lego Ninjago Masters of Spinjitzu 9: Night of the Nindroids

Descripción Paperback. Condición: Very Good. The book has been read, but is in excellent condition. Pages are intact and not marred by notes or highlighting. The spine remains undamaged. Nş de ref. del artículo: GOR010171657