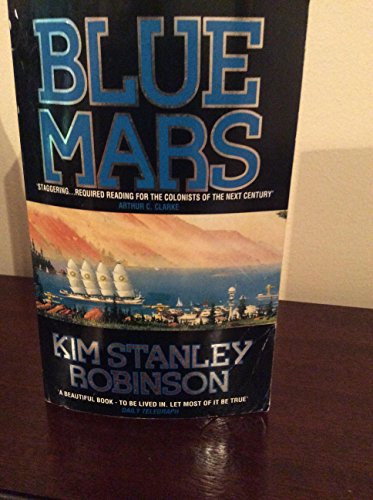 ‘One of the finest working novelists in any genre’
GUARDIAN

'If I had to choose one writer whose work will set the standard for science fiction in the future, it would be Kim Stanley Robinson’
NEW YORK TIMES

Praise for The Mars Trilogy:

‘One of the finest works of American SF’
TIMES LITERARY SUPPLEMENT

‘A staggering book. The best novel on the colonization of Mars that has ever been written’
Arthur C. Clarke

The final novel in the worldwide bestselling Mars trilogy.

Mars has grown up

It is fully terraformed – genetically engineered plants and animals live by newly built canals and young but stormy seas.

It is politically independent. A brave and buzzing new world. Most of the First Hundred have died. Those that remain are like walking myths to Martian youth.

Earth has grown too much

Chronic overpopulation, bitter nationalism, scarce resourses. For too many Terrans, Mars is a mocking utopia. A dream to live for, fight for... perhaps even die for.

Descripción Paperback. Condición: Very Good. The book has been read, but is in excellent condition. Pages are intact and not marred by notes or highlighting. The spine remains undamaged. Nş de ref. del artículo: GOR001215069

Descripción Paperback. Condición: Good. The book has been read but remains in clean condition. All pages are intact and the cover is intact. Some minor wear to the spine. Nş de ref. del artículo: GOR001178884

Descripción Paperback. Condición: Fair. A readable copy of the book which may include some defects such as highlighting and notes. Cover and pages may be creased and show discolouration. Nş de ref. del artículo: GOR000932032

Descripción Harper Collins (Voyager), 1999. Paperback. Condición: Good. A slight tan to page edges Good condition is defined as: a copy that has been read but remains in clean condition. All of the pages are intact and the cover is intact and the spine may show signs of wear. The book may have minor markings which are not specifically mentioned. Most items will be dispatched the same or the next working day. Nş de ref. del artículo: wbb0016128137

Descripción Harper Collins (Voyager) 06/12/1999, 1999. Paperback. Condición: Very Good. Shipped within 24 hours from our UK warehouse. Clean, undamaged book with no damage to pages and minimal wear to the cover. Spine still tight, in very good condition. Remember if you are not happy, you are covered by our 100% money back guarantee. Nş de ref. del artículo: 6545-9780586213919

Descripción Voyager, 1996. Paperback. Condición: Used; Good. **Simply Brit** Shipped with Premium postal service within 24 hours from the UK with impressive delivery time. We have dispatched from our book depository; items of good condition to over ten million satisfied customers worldwide. We are committed to providing you with reliable and efficient service at all times. Nş de ref. del artículo: 1253400

Descripción Harper Collins (Voyager), 1999. Paperback. Condición: Very Good. Blue Mars (Mars Trilogy) This book is in very good condition and will be shipped within 24 hours of ordering. The cover may have some limited signs of wear but the pages are clean, intact and the spine remains undamaged. This book has clearly been well maintained and looked after thus far. Money back guarantee if you are not satisfied. See all our books here, order more than 1 book and get discounted shipping. . Nş de ref. del artículo: 7719-9780586213919

Descripción Voyager 1996 Paperback, 1996. Condición: Fair. Mars is a living, breathing planet, resplendent with genetically engineered plants and animals living by recently formed canals and stormy seas - an Eden to be envied. Earth is creaking under the weight of overdevelopment; too many people with too few resources - an object lesson in how to not run a planet. The survivors of the First Hundred, among them Michel, Nadia, Maya, Sax, and Ann, have achieved their goal; political independence. They are like walking myths to a Martian youth determined to preserve their hard-won gains. But what to preserve and what to create? The original schisms in the First Hundred have hardened into polar opposites; Reds (to keep the planet in its original wilderness state) and Greens (to terraform for human use). Civil war looms. Worse, Earth looks on bitterly. For many Terrans, Mars is a mocking utopia. A dream to live for - perhaps even die for. 789 pages. Nş de ref. del artículo: 1247483