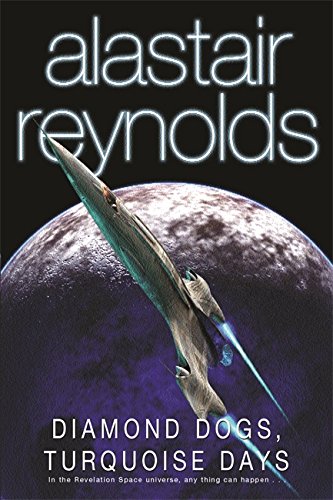 Just when you thought it was safe to go back into interstellar space . . .
Alastair Reynolds burst onto the SF scene with the Arthur C. Clarke Award-shortlisted REVELATION SPACE, British Science Fiction Award-winning CHASM CITY, and REDEMPTION ARK. Now experience the phenomenal imagination and breathtaking vision of ¿The most exciting space opera writer working today¿ (Locus) in these two tales of high adventure set in the same universe as his novels. The title story, ¿Diamond Dogs¿, tells of a group of mercenaries trying to unravel the mystery of a particularly inhospitable alien tower on a distant world; 'Turquoise Days' is about Naqi, who has devoted her life to studying the alien Pattern Jugglers.

Alastair Reynolds was born in Barry, South Wales, in 1966. He studied at Newcastle and St Andrews Universities and has a Ph.D. in astronomy. He stopped working as an astrophysicist for the European Space Agency to become a full-time writer. REVELATION SPACE and PUSHING ICE were shortlisted for the ARTHUR C. CLARKE AWARD; REVELATION SPACE, ABSOLUTION GAP, DIAMOND DOGS and CENTURY RAIN were shortlisted for the BRITISH SCIENCE FICTION AWARD and CHASM CITY won the BRITISH SCIENCE FICTION AWARD.

You can learn more by visiting www.alastairreynolds.com, or by following @AquilaRift on twitter.