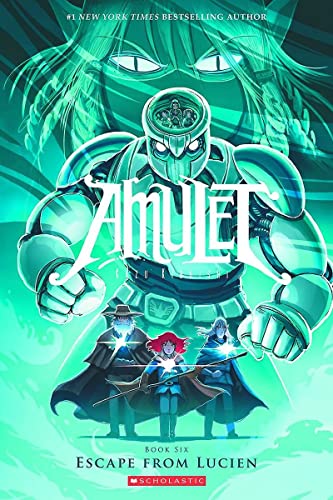 Kazu Kibuishi's bestselling series continues! Emily, Navin, and their friends continue to battle the Elf King in hopes of destroying him forever, but one of his most loyal followers, Max, isn't making it easy for them. The crew journeys to Lucien, a city that's been ravaged by the war. Emily has more enemies there than she realizes - and it'll take everything she's got to get herself and her friends out of the city alive.

Praise for the Amulet series
"Five -- no, three pages into Amulet and you'll be hooked." -- Jeff Smith, creator of BONE
"Stellar artwork, imaginative character design, moody color and consistent pacing." -- PUBLISHERS WEEKLY
"A must for all fantasy fans." -- KIRKUS REVIEWS

Navin and his classmates journey to Lucien, a city ravaged by war and plagued by mysterious creatures, where they search for a beacon essential to their fight against the Elf King. Meanwhile, Emily heads back into the Void with Max, one of the Elf King's loyal followers, where she learns his darkest secrets. The stakes, for both Emily and Navin, are higher than ever.

7. Escape from Lucien (Paperback or Softback)