Artículos relacionados a The Merchant of Venice (Dover Thrift Editions) 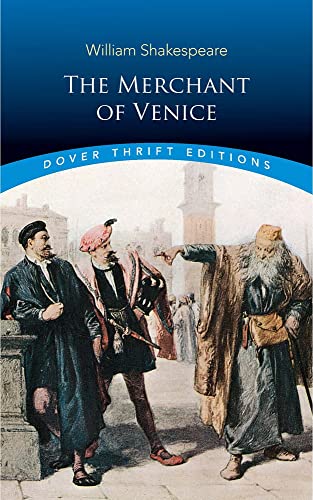 Tragicomic drama of love, wealth, and justice revolves around a Venetian moneylender's bargain with a young merchant for "a pound of flesh."

Great pains have been taken to follow Shakespeare's intentions with regard to the act and scene division and the exact form of speech. The editing has been done from the quarto or folio texts, depending on which considered more authoritative, and the ideal has been to reproduce the chosen texts with as few alterations as possible. In order to help the reader and student, the annotations have been arranged on the relevant pages, providing an easily accessible and indispensable source of information.

1. The Merchant of Venice (Paperback)

Descripción Dover Publications Inc., United States, 1995. Paperback. Condición: New. New edition. Language: English. Brand new Book. The Merchant of Venice is an intriguing drama of love, greed, and revenge. At its heart, the play contrasts the characters of the maddened and vengeful Shylock, a Venetian moneylender, with the gracious, level-headed Portia, a wealthy young woman besieged by suitors. At the play's climax, Shylock insists on the enforcement of a binding contract that will cost the life of the merchant Antonio -- inciting Portia to mount a memorable defense.In this richly plotted drama, Shylock, whom Shakespeare endowed with all of the depth and vitality of his greatest characters, is not alone in his villainy. In scene after scene, a large cast of ambitious and scheming characters demonstrates that honesty is a quality often strained where matters of love and money are concerned.The gravity and suspense of the play's central plot, together with its romance, have made The Merchant of Venice a favorite of audiences, and one of the most studied and performed of Shakespeare's plays. It is reprinted here from an authoritative text, complete with explanatory footnotes. Nş de ref. del artículo: AAC9780486284927

2. The Merchant of Venice (Paperback or Softback)

4. The Merchant of Venice (Paperback)

Descripción Paperback. Condición: New. Paperback. Tragicomic drama of love, wealth, and justice revolves around a Venetian moneylender's bargain with a young merchant for "a pound of flesh." Great pains have been taken to f.Shipping may be from multiple locations in the US or from the UK, depending on stock availability. 96 pages. 0.120. Nş de ref. del artículo: 9780486284927