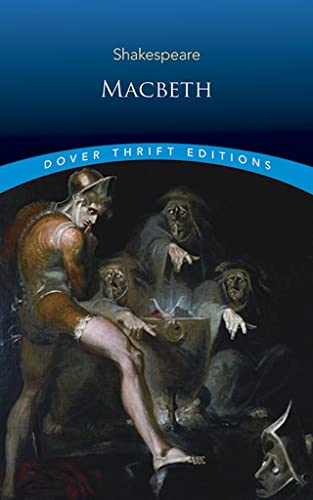 Reseńa del editor:
One of the great Shakespearean tragedies, Macbeth is a dark and bloody drama of ambition, murder, guilt, and revenge. Prompted by the prophecies of three mysterious witches and goaded by his ambitious wife, the Scottish thane Macbeth murders Duncan, King of Scotland, in order to succeed him on the throne. This foul deed soon entangles the conscience-stricken nobleman in a web of treachery, deceit, and more murders, which ultimately spells his doom. Set amid the gloomy castles and lonely heaths of medieval Scotland, Macbeth paints a striking dramatic portrait of a man of honor and integrity destroyed by a fatal character flaw and the tortures of a guilty imagination.
A selection of the Common Core State Standards Initiative.
Biografía del autor:

"He was not of an age, but for all time," declared Ben Jonson of his contemporary William Shakespeare (1564–1616). Jonson's praise is especially prescient, since at the turn of the 17th century Shakespeare was but one of many popular London playwrights and none of his dramas were printed in his lifetime. The reason so many of his works survive is because two of his actor friends, with the assistance of Jonson, assembled and published the First Folio edition of 1623.

Descripción Paperback. Condición: new. Paperback. Dark and bloody drama of ambition, guilt, and revenge centers on an ambitious Scottish nobleman who murders the king in order to succeed to the throne. Tortured by his conscience and fearful of discovery, he becomes fatally enmeshed in a web of treachery and deceit that spells his doom. Unique features include an extensive overview of Shakespeare&#039;s life, world, and theater by the general editor of Signet Classic Shakespeare series, plus a special introduction to the play by the editor Sylvan Barnet, Tufts University. It also contains comprehensive stage and screen history of notable actors, directors, and productions of &quot;Macbeth&quot;, then and now. Shipping may be from multiple locations in the US or from the UK, depending on stock availability. Nş de ref. del artículo: 9780486278025