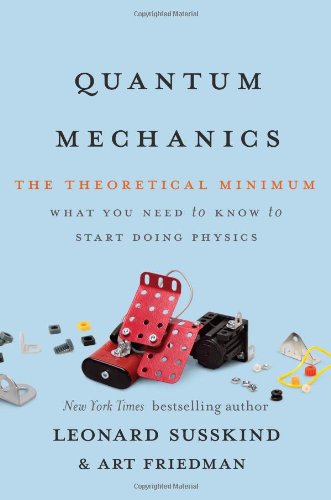 "The writing is fresh and immediate, with plenty of detail packaged into the smooth narrative... [O]n their own terms, I found Susskind and Friedman's explanations crisp and satisfying... I maintain a clear recollection of the bewilderment with which I struggled through my own university quantum-mechanics courses. For students in a similar position, trying to draw together the fragments of formalism into a clear conceptual whole, Susskind and Friedman's persuasive overview--and their insistence on explaining, with sharp mathematical detail, exactly what it is that is strange about quantum mechanics--may be just what is needed." --David Seery, Nature "[T]he book will work well as a companion text for university students studying quantum mechanics or the armchair physicists following Susskind's YouTube lectures." --Publishers Weekly "This is quantum mechanics for real. This is the good stuff, the most mysterious aspects of how reality works, set out with crystalline clarity. If you want to know how physicists really think about the world, this book is the place to start." --Sean Carroll, physicist, California Institute of Technology, and author of The Particle at the End of the Universe "Susskind does a wonderful job of carefully going through in great detail the story of the simplest quantum system. As advertised, it's the theoretical minimum, but a great place for someone to start on the road to a serious understanding of the mysteries of quantum physics." --Peter Woit, Professor of Mathematics, Columbia University, and author of Not Even Wrong: The Failure of String Theory and the Search for Unity in Physical Law

First he taught you classical mechanics. Now, physicist Leonard Susskind has teamed up with data engineer Art Friedman to present the theory and associated mathematics of the strange world of quantum mechanics. In this follow-up to the New York Times best-selling The Theoretical Minimum, Susskind and Friedman provide a lively introduction to this famously difficult field, which attempts to understand the behavior of sub-atomic objects through mathematical abstractions. Unlike other popularizations that shy away from quantum mechanics' weirdness, Quantum Mechanics embraces the utter strangeness of quantum logic. The authors offer crystal-clear explanations of the principles of quantum states, uncertainty and time dependence, entanglement, and particle and wave states, among other topics, and each chapter includes exercises to ensure mastery of each area. Like The Theoretical Minimum, this volume runs parallel to Susskind's eponymous Stanford University-hosted continuing education course. An approachable yet rigorous introduction to a famously difficult topic, Quantum Mechanics provides a tool kit for amateur scientists to learn physics at their own pace.