Artículos relacionados a Rome in the East: The Transformation of an Empire

Ball, Warwick Rome in the East: The Transformation of an Empire

Rome in the East: The Transformation of an Empire 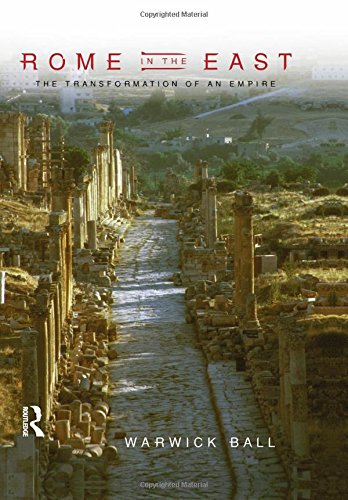 'Truly remarkable and wide ranging survey ... a book that, without any doubt, is premier in this new view of Rome in the east.' - Minerva

'This is the most complete survey of the area in English and is an immensely valuable exploration of Syrian, Iranian, and even Indian influences on Roman culture.' - Choice

In this lavishly illustrated and arresting study, Warwick Ball presents the story of Rome's overwhelming fascination with the East through a coverage of the historical, architectural and archaeological evidence unparalleled in both breadth and detail.
This was a fascination of the new world for the old, and of the mundane for the exotic - a love affair that took literal form in the story of Antony and Cleopatra. From Rome's legendary foundation by Aeneas and the Trojan heroes as the New Troy, through the installation of Arabs as Roman emperors, to the eventual foundation of the new Rome by a latter-day Aeneas at Constantinople, the East took over Rome, - and Rome eventually ditched Europe to the barbarians.
Rome in the East overturns the received wisdom about Rome as the bastion of European culture. Newly available in paperback, and illustrated with almost 300 photographs, plans and drawings, its accessible and comprehensive approach makes it an ideal resource for both the academic and general reader.

1. ROME IN THE EAST: THE TRANSFORMA

2. Rome in the East: The Transformation of an Empire Ball, Warwick