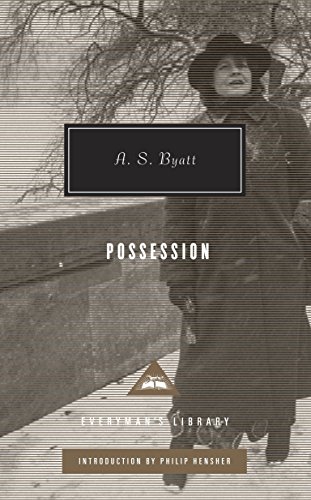 "A combination of intellectual fireworks and magnetic readability."
--THE GUARDIAN

"An altogether magical performance . . . This is a novel for every taste: a heartbreaking Victorian love story, a take-no-prisoners comedy of contemporary academic life, and an unputdownable supernatural mystery. You turn the last page feeling stunned and elated, happy to have had the chance to read it."
--THE WASHINGTON POST BOOK WORLD

"This cerebral extravaganza of a story zigzags with unembarrassed zest across an imaginative terrain bristling with symbolism and symmetries, shimmering with myth and legend, and haunted everywhere by presences of the past . . . Possession is eloquent about the intense pleasures of reading. And, with sumptuous artistry, it provides a feast of them."
--THE SUNDAY TIMES (London)

"Gorgeously written . . . Dazzling . . . A tour de force."
--THE NEW YORK TIMES BOOK REVIEW "A masterpiece of wordplay and adventure."
--LOS ANGELES TIMES BOOK REVIEW "[Possession] remains one of the most popular and admired winners of the Booker Prize . . . [It] engages with its period through virtuoso re-creation of that past's writings in multiple forms . . . The astounding mastery of Possession lies, surely, in the confidence and sweep of its construction of those Victorian voices . . . Few, if any, novels of the time approached the past with such originality and formal daring . . . English literature of the last quarter century would look very different without it."
--from the Introduction by Philip Hensher Reseńa del editor:

A. S. Byatt’s beloved novel—winner of the Booker Prize and an international best seller—is a spellbinding intellectual mystery and an utterly transfixing love story.

Roland Michell and Maud Bailey are young academics in the 1980s researching the lives of two Victorian literary figures: the major poet Randolph Henry Ash and the lesser-known “fairy poetess” Christabel LaMotte. After coming across hints of a long-buried and potentially explosive secret in the poets’ letters and journals, Maud and Roland join forces to track their subjects’ movements from London to Yorkshire to Brittany, tracing clues embedded in poems and hunting down evidence in dusty archives and in a freshly opened grave. Their eagerness to uncover the truth draws the two lonely scholars together, but what they discover will have implications they could not have imagined.

An extraordinary counterpoint of passions and ideas, POSSESSION is woven throughout with invented historical documents and poetry of dazzling richness and depth, bringing Byatt’s Victorian characters vividly to life. The result is both a gripping story and a brilliant exploration of the nature of love and obsession—and of what we can know about the past.