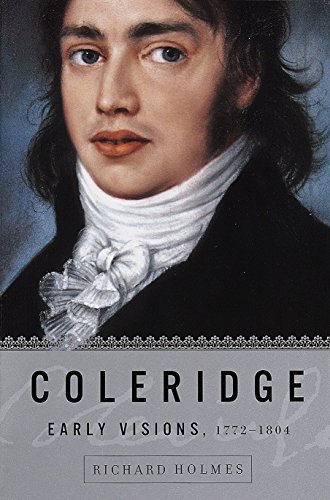 "Poet, journalist, letter-writer, critic, autobiographer, lecturer, folklorist, philosopher: when a man's genius is so amorphous and protean, how can any one biographer hope to encompass it? Yet, miraculously, in this first of two volumes, Richard Holmes has succeeded in doing so . . . His masterly book leaves one feeling that, if there were a single literary giant of the past, other than Shakespeare, whom one was permitted to meet, then Coleridge would be the choice."
--Francis King, Evening Standard (London)

"The best literary biography since Ellmann's Oscar Wilde."
--John Mortimer, Sunday Times (London) "Dazzling . . . Here is Coleridge, attractive and repellant, with all his seductive contradictions: the young man with his mountainous aspirations, his dreaminess . . . yammering poetry, pounding the turnpikes, dominating drawing-rooms; the foaming genius, messy with metaphysical secretions and uncontrollable speculations. Holmes has not merely reinterpreted Coleridge, he has re-created him, and his biography has the aura of fiction, the shimmer of an authentic portrait. [This is] a biography like few I have ever read."
--James Wood, The Guardian (London) Reseńa del editor:

The first in a definitive two-volume biography of Samuel Taylor Coleridge sheds new light on the poet's life and work, revealing the intricacies of both his personality and his literary vision. Reprint.

Descripción Paperback. Condición: New. Reprint. Language: English. Brand new Book. Winner of the 1989 Whitbread Prize for Book of the Year, this is the first volume of Holmes's seminal two-part examination of Samuel Taylor Coleridge, one of Britain's greatest poets. Coleridge: Early Visions is the first part of Holmes's classic biography of Coleridge that forever transformed our view of the poet of 'Kubla Khan' and his place in the Romantic Movement. Dismissed by much recent scholarship as an opium addict, plagiarist, political apostate and mystic charlatan, Richard Holmes's Coleridge leaps out of the page as a brilliant, animated and endlessly provoking figure who invades the imagination. This is an act of biographical recreation which brings back to life Coleridge's poetry and encyclopaedic thought, his creative energy and physical presence. He is vivid and unexpected. Holmes draws the reader into the labyrinthine complications of his subject's personality and literary power, and faces us with profound questions about the nature of creativity, the relations between sexuality and friendship, the shifting grounds of political and religious belief. Nş de ref. del artículo: BZV9780375705403