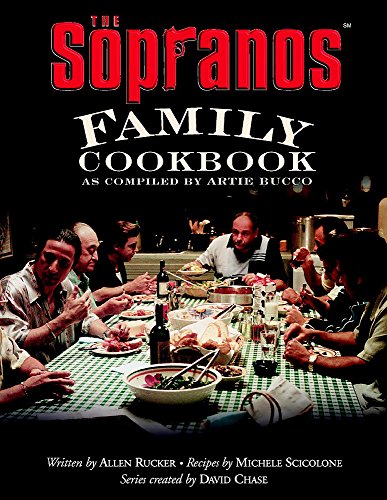 Will be dispatched from the UK. Brand new copy.

'Good old family cooking from the family that really does mean business. The Sopranos family cookbook is the essential guide to cooking the Italian way for goodfellas and notso goodfellas everywhere. Wonderful!' Mike Gayle 'Based on simply the best TV series ever, I would buy this and then wait to be invited to lots of Italian/American dinner parties' Bookseller, Top Books for Giving and Receiving this Christmas

Eat like America's favourite crime family: fabulous Southern Italian recipes, photos, and lore from the hit series THE SOPRANOS. Not just a SOPRANOS fan book, not just your typical Italian cookbook, THE SOPRANOS FAMILY COOKBOOK makes it easy to cook ziti as good as Carmela's and satisfy your SOPRANOS cravings at the same time. THE SOPRANOS FAMILY COOKBOOK contains over one hundred recipes created with the character in mind, luscious pictures of the prepared dishes and photographs of Tony, his family, and all the wiseguys eating and cooking big, beautiful Italian meals. We've got Uncle Junior waxing nostalgic about Newark's Little Italy, Tony's grilling tips, Janice's stroll down dysfunctional memory lane, Artie's signature specialties a la Bucco, Livia's handwritten recipe for biscotti from 1967 and Carmela's favor-inducing ricotta pie with pineapple. Salted with SOPRANOS flavour, peppered with little known background and references, get behind the scenes - and into the kitchen - with these family dishes. The way to the heart of the SOPRANOS is through the stomach, and the way to create traditional Neapolitan feasts is with THE SOPRANOS FAMILY COOKBOOK.