ArtĒculos relacionados a Picture this Century: Introduction to Twentieth Century... 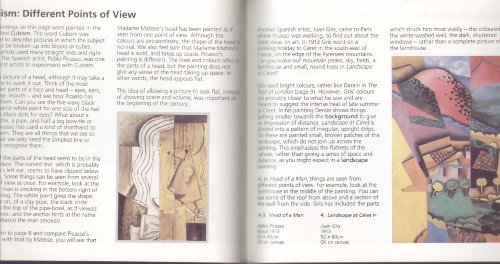 This illustrated introduction to 20th-century Western art highlights ideas and movements that have influenced many artists this century. The book explains how to appreciate a variety of works of art, including sculpture, photography and painting, including both famous painters from the beginning of the century, such as Picasso and Matisse, and contemporary artists, including Sonia Boyce and Leon Golub. Other works by Felicity Woolf include "Picture This", "Bodylines", "The Human Figure in Art" and "Myths and Legends: Paintings in the National Gallery".

Comprar usado
Dispatched, from the UK, within... Ver este artĒculo

Descripci¾n Paperback. Condici¾n: Used; Good. Dispatched, from the UK, within 48 hours of ordering. This book is in good condition but will show signs of previous ownership. Please expect some creasing to the spine and/or minor damage to the cover. Damaged cover. The cover of is slightly damaged for instance a torn or bent corner. N║ de ref. del artĒculo: CHL4344215

Descripci¾n Paperback. Condici¾n: Very Good. Shipped within 24 hours from our UK warehouse. Clean, undamaged book with no damage to pages and minimal wear to the cover. Spine still tight, in very good condition. Remember if you are not happy, you are covered by our 100% money back guarantee. N║ de ref. del artĒculo: 6545-9780340597576

Descripci¾n Paperback. Condici¾n: Very Good. Picture this Century: Introduction to Twentieth Century Art This book is in very good condition and will be shipped within 24 hours of ordering. The cover may have some limited signs of wear but the pages are clean, intact and the spine remains undamaged. This book has clearly been well maintained and looked after thus far. Money back guarantee if you are not satisfied. See all our books here, order more than 1 book and get discounted shipping. . N║ de ref. del artĒculo: 7719-9780340597576