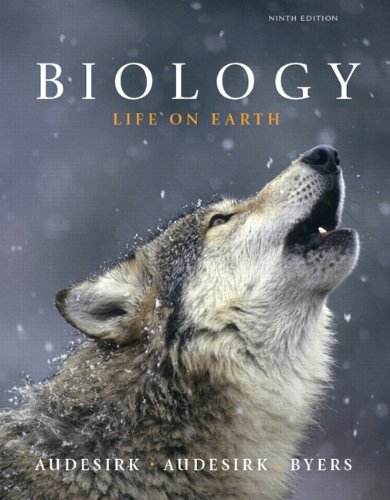 Known for its thorough coverage of diversity, ecology, and environmental issues, this comprehensive book engages you with integrated, relevant case studies, and challenges you with thought-provoking questions throughout each chapter. The fully revised Biology: Life on Earth, Ninth Edition, has the same friendly writing style appreciated by thousands of students, but with greater emphasis on engaging, real-world applications. New to this edition are "Case Study Continued" sections, which connect a chapter's case study to relevant biological topics covered in the chapter, and "Have you ever wondered?" features that respond to commonly asked questions from students. Thoroughly revised illustrations and expanded critical thinking questions have been added to each chapter and are supplemented by the powerful new MasteringBiology (TM) program that helps you make effective use of your study time outside of the classroom. For coverage of plant and animal anatomy & physiology, an alternate edition-Biology: Life on Earth with Physiology, Ninth Edition-is also available.

Terry and Gerry Audesirk grew up in New Jersey, where they met as undergraduates. After marrying in 1970, they moved to California, where Terry earned her doctorate in marine ecology at the University of Southern California and Gerry earned his doctorate in neurobiology at the California Institute of Technology. As postdoctoral fellows at the University of Washington's marine laboratories, they worked together on the neural bases of behavior, using a marine mollusk as a model system. The Audesirks joined the faculty of the University of Colorado, Denver, in 1982, where they taught introductory biology and neurobiology, and researched mechanisms of heavy metal toxicity and the effects of estrogen on cultured neurons until their retirement in 2006. Terry and Gerry share a deep appreciation of nature and of the outdoors. After retirement, they moved to a ranch near Steamboat Springs, where they enjoy hiking, horseback riding, and snowshoeing. Long-time members of many conservation organizations, they do volunteer work with the Nature Conservatory. Bruce E. Byers, a midwesterner transplanted to the hills of western Massachusetts, is a professor in the biology department at the University of Massachusetts, Amherst. He has been a member of the faculty at UMass (where he also completed his doctoral degree) since 1993. Bruce teaches courses in ornithology and evolution. A lifelong fascination with birds ultimately led Bruce to scientific exploration of avian biology. His current research focuses on the behavioral ecology of birds, especially on the function and evolution of the vocal signals that birds use to communicate. The pursuit of vocalizations often takes Bruce outdoors, where he can be found before dawn, tape recorder in hand, awaiting the first songs of a new day.

DescripciÛn soft cover. CondiciÛn: New. International Edition. No supplemental materials. International Editions may have a different cover or ISBN but generally have the exact same content as the US edition, just at a more affordable price. In some cases, end of chapter questions may vary slightly from the US edition. International Editions are typically printed in grayscale, and likely will not have any color throughout the book. New. Books ship from multiple locations depending on availability. All orders are shipped with tracking information. We take pride in our customer service. Please contact us if you have any questions regarding this listing. N∫ de ref. del artÌculo: 16785