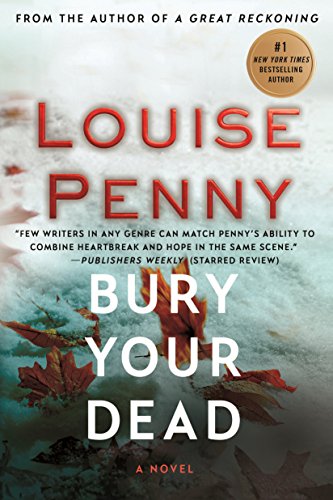 "Few writers in any genre can match Penny's ability to combine heartbreak and hope in the same scene."
--Publishers Weekly (starred review)

"The best yet, a true tour de force of storytelling....Penny hits every note perfectly in what is one of the most elaborately constructed and remarkably
moving mysteries in years."
--Booklist (starred review)

"Louise Penny's portrait of Quebec City is as lovingly detailed and evocative as anything she has written, and her control over this intricate blending of history and mystery is absolute. Furthermore, the deepening of Gamache's character is profoundly satisfying. The book, obviously, is a must-read for her fans, and demonstrates once again that she is in the first rank of crime-fiction writers in Canada, or indeed, in the world."
--Globe and Mail

"Penny seamlessly weaves subplots into her elegant book, along with rich portraits of Inspector Gamache and the endearingly cracked characters around him."
--Seattle Times

"Its shocking final solution here is brilliantly conceived and executed."
--The Denver Post

"Penny, always a demon researcher, is at the top of her game in the new book at combining real history with her own fictions. In addition to a great deal of Champlain back story - only a specialist in early Quebec history could judge whether Penny is letting her imagination run rampant - she presents in passing theories about Gen. Montcalm's failures at the Plains of Abraham and an assessment of the sad dwindling of the English presence in Quebec City."
--Toronto Star

"Fans who were upset by the shocking outcome of Penny's 'The Brutal Telling' will be pleased that she is not quite done with that unhappy episode in our favorite village. This series just keeps getting better."
--Charlotte Observer

"Louise Penny commands a deep and disturbing darkness of the soul -- with the cost of redemption resolutely figured into the consequences."
--Brattleboro Reformer

"With a rich depth of creativity, a stylish sense of language and an unerring instinct for the defining aspects of humanity, Penny explores eternal truths and, in so doing, shows us ourselves."
--Richmond Times Dispatch

Taking leave during Quebec's Winter Carnival after a case gone wrong, a disgruntled Chief Inspector Armand Gamache is unable to avoid assisting a politically charged investigation involving a historian's murder during a search for a famous figure's burial site. By the Agatha Award-winning author A Fatal Grace. Reprint.

Bury Your Dead (Paperback or Softback)