Artículos relacionados a One Christmas in Washington

One Christmas in Washington 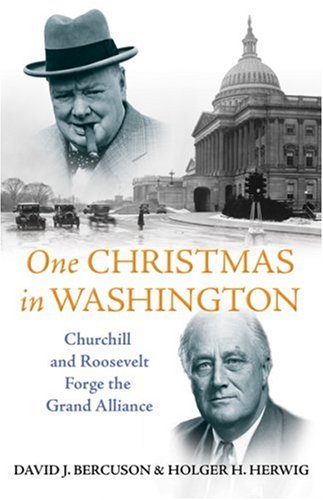 By Christmas Eve 1941 the war could hardly have been worse for Britain or the United States. The Japanese had entered the war, first bombing Pearl Harbor where they sank five US battleships. Their forces were soon landing on Hong Kong Island, on the Thai and Malaya coasts and invading the Philippines. A week before Christmas the Italian navy penetrated Alexandra harbour in Egypt and sank the battleships Queen Elizabeth and Valiant. In the Soviet Union German infanty detachments had reached the Khimki tram station less than 12 miles from downtown Moscow; and Leningrad was under siege. The US declared war and Churchill braved the north Atlantic in HMS Duke of York for meetings with President Roosevelt. Because neither the new British Chief of Staff, Alanbrooke or Churchill's private secretary, John Colville accompanied their boss, their otherwise complete and revealing diaries for once say little or nothing about what happened. Bercuson and Herwig have pieced together the hitherto untold story of how the two major allies planned their fight against the Axis powers, using the code-name Arcadia. During the three weeks Churchill spent with Roosevelt he suffered major heart trouble and nearly died. How two very different nations began to work together, how Churchill and Roosevelt, two super-egos, were joined by common purpose is the backdrop to an enthralling microcosm of WWII.

1. One Christmas in Washington