Artículos relacionados a The American West: A New Interpretive History 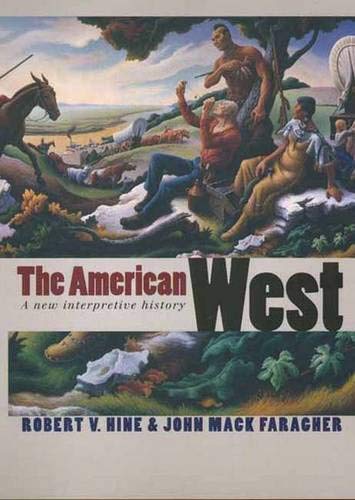 A survey of frontier history, tracing the story from the first Columbian contacts between Indians and Europeans to the multicultural encounters of the modern southwest. It provides details about topics such as western landscapes, environmental movements, literature, arts and film.

Two eminent historians, Robert V. Hine and John Mack Faragher, present the American West as both frontier and region, real and imagined, old and new, and they show how men and women of all ethnic groups were affected when different cultures met and clashed. Their concise and engaging survey of frontier history traces the story from the first Columbian contacts between Indians and Europeans to the multicultural encounters of the modern Southwest.

The book attunes us to the voices of the frontiers many diverse peoples: Indians, struggling to defend their homelands and searching for a way to live with colonialism; the men and women who became immigrants and colonists from all over the world; African Americans, both slave and free; and border-land migrants from Mexico, Canada, and Asian lands. Profusely illustrated with contemporary drawings, posters, and photographs and written In lively and accessible prose, the book not only presents a panoramic view of historical events and characters but also provides fascinating details about such topics as western landscapes, environmental movements, literature, visual arts, and film.

Following in the tradition of Hine's earlier acclaimed work, The American West: An Interpretive History, this volume will be an essential resource for scholars, students, and general readers.

1. The American West: A New Interpretive History (The Lamar Series in Western History)

2. The American West: A New Interpretive History (The Lamar Series in Western History)