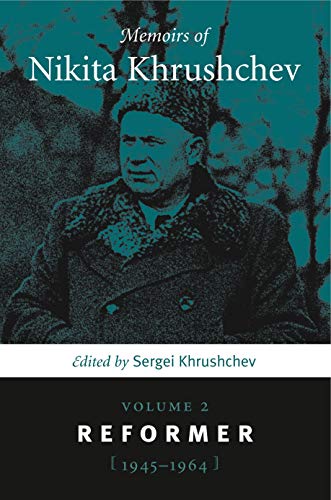 "There is no better way to appreciate the historical and humanistic depths of this drama than by spending time with Nikita Khrushchev's memoirs."-Maxim Matusevich, American Communist History "The Memoirs of Nikita Krushchev remain a highly valuable source for historians of the Soviet Union, and should be of great interest to those interested in the history of the Cold War. Because they provide a unique insight into the mindset of the Soviet leadership, and because their contents can be enjoyed by those without too much background knowledge in Soviet history, they can also be fruitfully used by undergraduate as a primary source."-Kees Boterbloem, Canadian Journal of History "Like the preceding volume, this work is a fine translation, easy to read, but fragmented. There are excellent notes following each chapter and photographs showing Krushchev up to his retirement. The index is excellent and a number of appendixes are included, some quite lengthy, which provide rare insights into Krushchev's character. This volume would be another valuable addition for the Soviet specialist but military historians should wait for the final volume, which hopefully will go into more detail regarding the major Cold War events of Khrushchev's tenure as General Secretary."-Paul Wanke, Military History "In spight of Khrushchev's generally negative attitude toward Jews, the appearance of the second volume of his posthumous reminiscences, Memoirs of Nikita Khrushchev will be of great interest to all Kremlin watchers."-Sheldon Kirshner, Canadian Jewish News "This is the second of three huge volumes that present, for the first time in English, a complete version of the tape-recorded memoirs of Nikita Khrushchev, the leader of the Communist Party of the Soviet Union (SPSU) from September 1953 to October 1964. Pennsylvania State University Press deserves praise for taking on this enormous task, which was supported in part by grants from a number of individuals and private foundations. . . . The 3-volume set of Khrushchev's memoirs is an indispensable resource for scholars interested in Soviet politics, Soviet foreign policy, and the Cold War. This second volume is especially useful in its discussion of political rivalries, the Machiavellian nature of Soviet politics, and the dilemmas of Soviet military policy in the nuclear age."-Mark Kramer, Journal of Modern History "The single most comprehensive, candid, and authoritative account of the inner workings of the Kremlin leadership. . . . One of the most extraordinary archives of the twentieth century."-Strobe Talbott, former U.S. Deputy Secretary of State "Nikita Khrushchev was one of the most important political leaders of the twentieth century. Without his memoirs, neither the rise and fall of the Soviet Union nor the history of the Cold War can be fully understood. By dictating his memoirs and publishing them in the West, Khrushchev transformed himself from the USSR's leader to one of its first dissidents. His remarkably candid recollections were a harbinger of glasnost to come. . Like virtually all memoirs, his have a personal and political agenda, but even what might be called Khrushchev's `myth of himself' is vital for understanding how this colorful figure could place his contradictory stamp on his country and the world. The fact that the full text of Khrushchev's memoirs will now be available in English is cause for rejoicing."-William Taubman, Amherst College, author of Khrushchev: The Man and His Era

Nikita Khrushchev's proclamation from the floor of the United Nations that "we will bury you" is one of the most chilling and memorable moments in the history of the Cold War, but from the Cuban Missile Crisis to his criticism of the Soviet ruling structure late in his career, the motivation for Khrushchev's actions wasn't always clear. Many Americans regarded him as a monster, while in the USSR he was viewed at various times as either hero or traitor. But what was he really like, and what did he really think? Readers of Khrushchev's memoirs will now be able to answer these questions for themselves (and will discover that what Khrushchev really said at the UN was "we will bury colonialism"). This is the second volume of three in the only complete and fully reliable version of the memoirs available in English. In the first volume, published in 2004, Khrushchev takes his story up to the close of World War II. In the first section of this second volume, he covers the period from 1945 to 1956, from the famine and devastation of the immediate aftermath of the war to Stalin's death, the subsequent power struggle, and the Twentieth Party Congress. The remaining sections are devoted to Khrushchev's recollections and thoughts about various domestic and international problems. In the second and third sections, he recalls the virgin lands and other agricultural campaigns and his dealings with nuclear scientists and weapons designers. He also considers other sectors of the economy, specifically construction and the provision of consumer goods, administrative reform, and questions of war, peace, and disarmament. In the last section, he discusses the relations between the party leadership and the intelligentsia. Included among the Appendixes are the notebooks of Nina Petrovna Kukharchuk, Khrushchev's wife.