Artículos relacionados a William Gay, Or, Play for Boys (Volume 3) 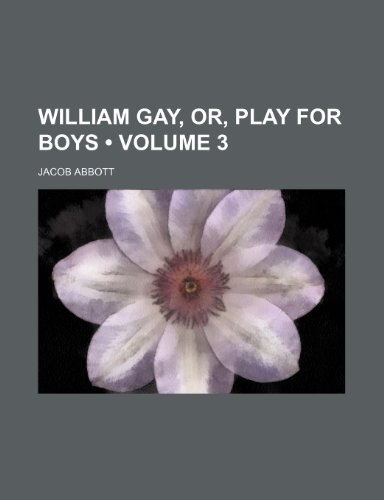 This historic book may have numerous typos and missing text. Purchasers can download a free scanned copy of the original book (without typos) from the publisher. Not indexed. Not illustrated. 1869. Excerpt: ... CHAPTER XHI. THE LIFE-PRESERVER. One day after William had finished his studies, and was at play with the children on the grounds, John Turner came to see them. He had a pond-lily in his hand. It was past midsummer at this time, and the pond-lilies were in full bloom. The children asked John where he got his pond-lily, and he said a boy gave it to him in the street. "I wish I had a pond-lily," said Louisa, and she took the flower out of John's hands to examine it more closely. It was not surprising that Louisa wished she had a pond-lily, for it is a very beautiful flower. It has a yellow centre with a great many curious looking pistils and stamens in it, and a multitude of pure white petals surrounding it, in rows, like the petals of a white rose or japonica, only more regular. "Did that boy have any more?' asked Louisa. "No," said John," but he said there were plenty more in the pond." "Yes," replied William," I know where they grow--plenty of them." "Let's go and get some," said Louisa, eagerly. "Why, you see," said William, "they grow in the water a good way from the shore, so that we have to go out for them in a boat, or on a raft. You would not dare to go out in such a place in a boat or on a raft." "Yes I should," said Louisa. "I should like to go very much." "You don't know how dark and deep the water is," said William, "and all full of lily-pads and snakes." "Snakes?" repeated Louisa. "At least," said William, "the stems of the lilies look just like snakes, all curled up in the water down as far as you can see. And for aught I know, there may be real snakes there among them. It looks like just the right place for them,--or eels." "1 should not care so much about the eels," said Louisa. "Could the snakes get into the boat?" "O no indeed," replied W...