Artículos relacionados a Religion and the Public Order of the European Union...

McCrea, Ronan Religion and the Public Order of the European Union (Oxford Studies in European Law) 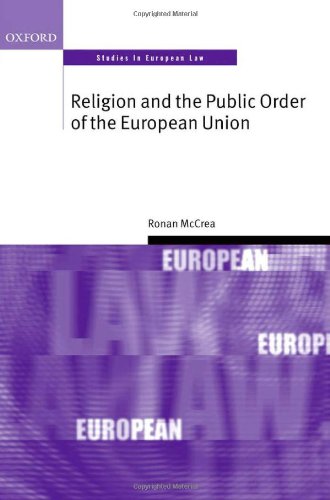 Críticas:
McCrea's book will become a must-read in the field of law and religion. It is the first sustained treatment of the relationship of law and religion within the European Union, is written cogently and is very engaging. (Joel Harrison, Journal of Church and State)

This book is truly the first publication of its kind . . . McCrea sets out to analyse the complex web of history, law and policy that defines the relationship between the European Union and religion, thus filling several large gaps in the pre-existing literature. He achieves this quest with clarity, not least thanks to the careful choice of the elements of culture, identity and autonomy as recurrent themes connecting the ideas presented throughout the chapters . . . Undoubtedly this book provides vital reference points for questions likely to be posed before the EU's institutions in the future...a book that is highly relevant to those researching, teaching and working in the field of religion, EU law and politics" (Journal of Common Market Studies)

This book makes a valuable and timely contribution to the debate on one of the most controversial areas of public life. (Cherie Blair)

...organised logically and written coherently. McRae's examination of the relationship between religion and the EU public order os conducted in a perceptive, resourceful and proficient manner. Indeed, he combines an otherwise byzantine maze of intertwining principles, relations and sources into a skilfully lucid account. (The Modern Law Review)

Most certainly, an enjoyable and informative read, and a valuable addition to the series. (Julian Rivers, University of Bristol)

This is an outstanding work: remarkably broad in scope and capturing the many intricacies of EU law in its recognition and handling of religious belief and practice, yet also logically structured and lucid in its treatment of a complex subject matter. ... This is a thought-provoking analysis of a complex subject, revealing a mastery of detail and giving thorough consideration to the issues from a wide variety of angles. (James Crabtree, Churchman)
Reseńa del editor:
Ronan McCrea offers the first comprehensive account of the role of religion within the public order of the European Union. He examines the facilitation and protection of individual and institutional religious freedom in EU law and the means through which the Union facilitates religious input and influence over law. In addition, the book draws attention to the limitations on religious influence over law and politics that are required by the Union. It shows the extent to which such limitations are identified as fundamental elements of the EU's public order and as prerequisites for membership.

The Union seeks to balance its predominantly Christian religious heritage with an equally strong secular and humanist tradition by facilitating religion as a form of cultural identity while simultaneously limiting its political influence. Such balancing takes place in the context of the Union's limited legitimacy and its commitment to respect for Member State cultural autonomy. Deference towards the cultural role of religion at Member State level enables culturally-entrenched religions to exercise a greater degree of influence within the Union's public order than "outsider" faiths that lack a comparable cultural role. Placing the Union's approach to religion in the context of broader historical and sociological trends around religion in Europe and of contemporary debates around secularism, equal treatment, and the role of Islam in Europe, McCrea sheds light on the interaction between religion and EU law in the face of a shifting religious demographic.

Descripción Gebunden. Condición: New. Dieser Artikel ist ein Print on Demand Artikel und wird nach Ihrer Bestellung fuer Sie gedruckt. The first account of the relationship between religion and the constitutional order of the EU, dealing with the key questions of religious freedom and the institutional role of religion and addressing the issues that are at the centre of public debate in Eu. Nş de ref. del artículo: 5896396