Artículos relacionados a The Essential Writings of Mahatma Gandhi

The Essential Writings of Mahatma Gandhi 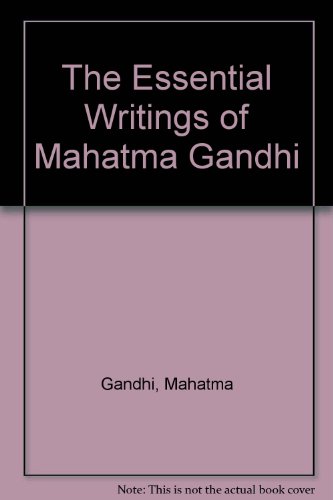 This selection of Gandhi's writings, taken from his letters, articles and books, represents a cross-section of his thought, from his early years as a young barrister freshly called to the bar in London, to his final days as sage and counsel to newly independent India. The selection not only reveals the growth of his ideas but also their essential internal integrity and consistency. The book shows Gandhi to be both an ascetic mystic contemplative, as well as a man of action, and reveals aspects of Gandhi's thought and character that may previously have been obscured.

The Essential Writings of Mahatma Gandhi

Descripción Hardcover. Condición: Good. Connecting readers with great books since 1972. Used books may not include companion materials, some shelf wear, may contain highlighting/notes, may not include cdrom or access codes. Customer service is our top priority!. Nş de ref. del artículo: S_309552628

The Essential Writings of Mahatma Gandhi: Book I

Descripción Hardcover. Condición: Good. No Jacket. Item is in good condition. Some moderate creases and wear. This item may not come with CDs or additional parts including access codes for textbooks. This may not have a dust jacket. Might be an ex-library copy and contain writing/highlighting. Photos are stock pictures and not of the actual item. Nş de ref. del artículo: DS-0195625439-3