Artículos relacionados a The Voice of Reason: Fundamentals of Critical Thinking,...

The Voice of Reason: Fundamentals of Critical Thinking, International Edition 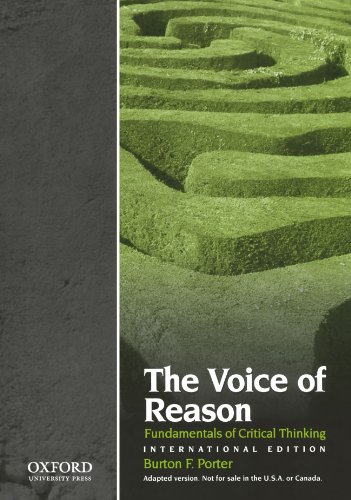 The Fundamentals of Ethics is designed to introduce students to the central ideas of moral philosophy in a thorough yet compact and accessible way. It contains several chapters each on The Good Life, Normative Ethics, and Metaethics, and provides more detailed coverage of these areas than is available in the main competing textbook, James Rachels' The Elements of Moral Philosophy. It also devotes attention to issues that are often omitted in other introductions, such as the Doctrines of Doing and Allowing and of Double Effect, ethical particularism, the desire-satisfaction theory of well-being, moral error theory, and Ross's theory of prima facie duties. Shafer-Landau notes that many introductory ethics textbooks are written without verve, and lead their readers through a fairly standard set of topics but fail to show why they should take an interest in the subject. His aim in this book, on the contrary, is to establish a real connection between the questions and convictions students bring to the classroom and what is in his book. The Fundamentals of Ethics is not only clear, but engaging; it is written vividly and focuses on the deep questions of moral life. The author reconstructs and carefully evaluates over forty central arguments in moral philosophy, helping students to improve their critical thinking skills along the way. The book is intended for Introduction to Ethics and Contemporary Moral Problems courses (when professors want their students to have solid grounding in ethical theory before addressing ethical issues). The book may also be used in introduction to philosophy courses when ethics is a large component of that course. The number one book in this market is James Rachels' Elements of Moral Philosophy, and Shafer-Landau intends to improve on this classic, or at least to give people are legitimate alternative. It will exceed Rachels' book both in its philosophical breadth and depth, but always with accessibility and engagement in mind.

1. The Voice of Reason: Fundamentals of Critical Thinking, International Edition

Descripción Paperback. Condición: Good. The book has been read but remains in clean condition. All pages are intact and the cover is intact. Some minor wear to the spine. Nş de ref. del artículo: GOR010151829

2. The Voice of Reason: Fundamentals of Critical Thinking, International Edition

Descripción OUP USA, 2009. Paperback. Condición: Good. Minor shelf wear Good condition is defined as: a copy that has been read but remains in clean condition. All of the pages are intact and the cover is intact and the spine may show signs of wear. The book may have minor markings which are not specifically mentioned. Most items will be dispatched the same or the next working day. Nş de ref. del artículo: wbb0013594055

3. The Voice of Reason: Fundamentals of Critical Thinking, International Edition