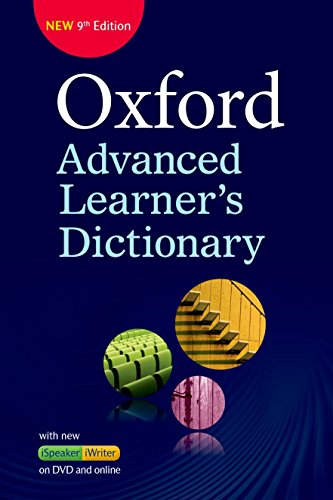 The Oxford Advanced Learner's Dictionary, or OALD, is recommended by teachers and students because it defines words in language students understand, gives useful example sentences, and includes the tools learners need to succeed in English. It has over 100 million users worldwide and is the world's best-selling advanced learner's dictionary. The new 9th edition with Oxford iSpeaker and Oxford iWriter make OALD the ultimate speaking and writing tool.

A S Hornby (1898 - 1978) had a profound and enduring influence on English Language Teaching, not only through his publications and ideas on teaching methods but also through the Educational Hornby Trust, set up in 1961.His publications with Oxford University Press include the Oxford Advanced Learner's Dictionary and the Oxford Student's Dictionary. The Oxford Advanced Learner's Dictionary has become one of the best-selling books of all time.Hornby's eminence in the field of English Language Teaching was recognized by the award of several honours. He was appointed CBE and made Fellow of University College, London, and a Master of Arts of the University of Oxford.

Descripción Oxford University Press Espańa, S.A., 2015. Book & Merchandise. Condición: New. 9th. Book & Merchandise. Say it with OxfordThe Oxford Advanced LearnerĂ˘â â ˘s Dictionary is the ultimate speaking and writing tool for developing the skills you need for passing exams and communicating .Shipping may be from multiple locations in the US or from the UK, depending on stock availability. 1820 pages. 1.580. Nş de ref. del artículo: 9780194798792

Descripción Oxford University Press, 2015. soft cover. Condición: New. International Edition. No supplemental materials. International Editions may have a different cover or ISBN but generally have the exact same content as the US edition, just at a more affordable price. In some cases, end of chapter questions may vary slightly from the US edition. International Editions are typically printed in grayscale, and likely will not have any color throughout the book. New. Books ship from multiple locations depending on availability. All orders are shipped with tracking information. We take pride in our customer service. Please contact us if you have any questions regarding this listing. Nş de ref. del artículo: 11891