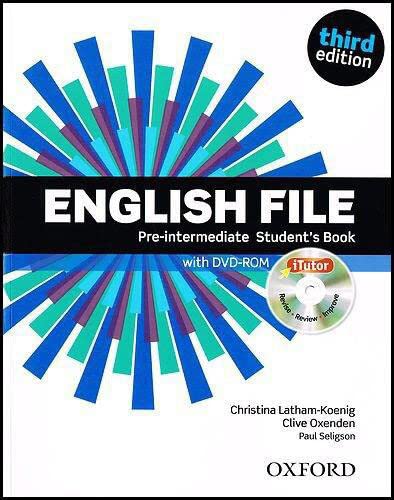 Clive Oxenden trained to teach EFL at International House, London, and later took his RSA (Cert) at Bromley College, Kent. He has taught English and trained teachers for 23 years, mainly in Spain but also in Turkey, Kuwait, Algeria, and the UK, where he was the RSA tutor at Padworth College in Berkshire. He has spent the last fifteen years teaching at the British Council, Valencia.Christina Latham-Koenig started her career in TEFL in 1976, teaching at International House and later at the British Council, both in Spain (Valencia) and in the UK. She got a distinction in the RSA Diploma in 1987, and then became a local supervisor for this course in Spain. She has worked as a teacher trainer for both native and non-native teachers of English. She now lives in Valencia, and she started collaborating as co-author of the English File series in 1995. Paul Seligson has been teaching EFL since 1978. He started with International House in Algeria and France, and then moved to the British Council for whom he worked in Egypt, Venezuela, and Spain, where for five years he was the Assistant Director of Studies in Valencia. After a year writing in the USA he moved back to the UK and worked in various ESOL colleges, mainly teaching immigrants and refugees.