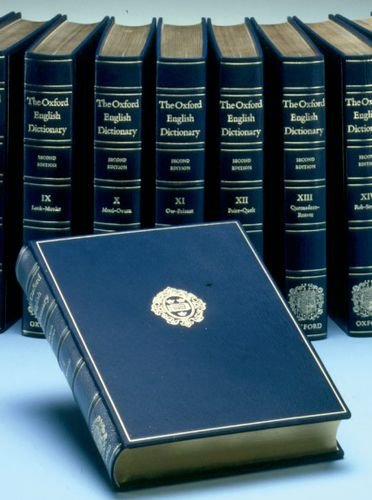 The 20-volume Oxford English Dictionary is the accepted authority on the evolution of the English language over the last millennium. It traces the usage of words through 2.4 million quotations from a wide range of international English language sources.

The OED has a unique historical focus. Accompanying each definition is a chronologically arranged group of quotations that trace the usage of words, and show the contexts in which they can be used. The quotations are drawn from a huge variety of sources worldwide - literary, scholarly, technical, and popular - and represent authors as disparate as Geoffrey Chaucer and Erica Jong, William Shakespeare, Charles Darwin and Isabella Beeton.

Other features distinguishing the entries in the Dictionary are authoritative definitions; detailed information on pronunciation using the International Phonetic Alphabet; listings of variant spellings used throughout each word's history; extensive treatment of etymology; and details of area of usage and of any regional characteristics.

Alongside the print edition is the Oxford English Dictionary online (www.oed.com). Updated quarterly, this award-winning online resource allows the Dictionary to evolve with the English language while the print edition remains as a historical record. Subscriptions are available to OED online on an individual or institutional basis. Visit www.oup.com/online/oed/ for details.