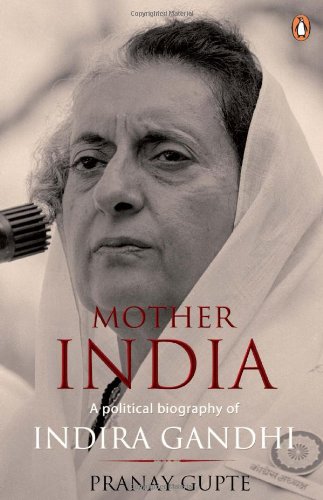 Mother India is the fascinating story of independent India's most complex GUPTE political figure: Indira Gandhi, the enigmatic and solitary daughter of the country's first prime minister, who rose to become prime minister herself.

This is a sweeping biography of the life of Indira Gandhi, one of the great leaders of the twentieth century. It is the story of a remarkable woman who rose to become prime minister of a troubled India, an India of more than 900 million people. The daughter of Jawaharlal Nehru, himself a prime minister before her, she grew up in a household fiercely dedicated to independence from England. Her parents spent much of their time as political prisoners. Indira spent much of her time in school or alone. When she was still a teenager, she raised money for the freedom movement and organized rallies; and although she studied at Oxford, she never doubted that she would devote her life to her country. With her mother dead, she accompanied Nehru on all of his state visits. It was her initiation into a political career of her own. As prime minister, Mrs. Gandhi wielded great power. She struggled ceaselessly to bring India into the modern world; she committed herself to programs to better the life of the people; she tirelessly promoted nonalignment and nuclear disarmament. But she was continually beleaguered by conflicts with the Muslims of Pakistan and the Sikhs of Punjab. As Pranay Gupte vividly recounts, these difficulties made Mrs. Gandhi more militant and more eager for control. She became self-interested, let corruption seep into her government, promised much, and delivered little. In the end, she made scores of enemies, and on October 31, 1984, she was assassinated by two bodyguards in her garden. In this stunning portrait, we have a trenchant analysis of a shrewd and deft political figure - a genius in her own right, bitterly opposed by many, but for millions of the masses she was always"Mother India", the embodiment of a thousand goddesses, "the symbol of shakti, or divine strength".