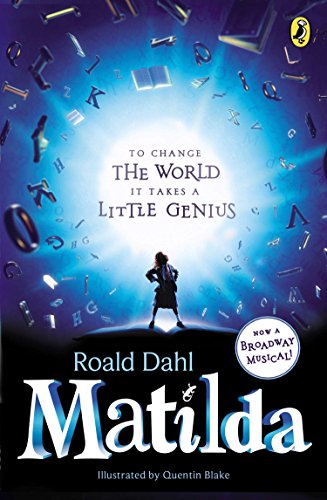 A 25th anniversary collector's edition of the popular classic by the award-winning late author of Charlie and the Chocolate Factory follows the story of an exceptional little girl whose lazy parents dismiss her as a nuisance and who discovers in the wake of a cruel headmistress's bullying that she has a remarkable power with which to avenge herself.

Roald Dahl (1916-1990) was born in Wales of Norwegian parents. He spent his childhood in England and, at age eighteen, went to work for the Shell Oil Company in Africa. When World War II broke out, he joined the Royal Air Force and became a fighter pilot. At the age of twenty-six he moved to Washington, D.C., and it was there he began to write. His first short story, which recounted his adventures in the war, was bought by The Saturday Evening Post, and so began a long and illustrious career.

After establishing himself as a writer for adults, Roald Dahl began writing children’s stories in 1960 while living in England with his family. His first stories were written as entertainment for his own children, to whom many of his books are dedicated.

Roald Dahl is now considered one of the most beloved storytellers of our time. Although he passed away in 1990, his popularity continues to increase as his fantastic novels, including James and the Giant Peach, Matilda, The BFG, and Charlie and the Chocolate Factory, delight an ever-growing legion of fans.

Descripción Paperback. Condición: New. Quentin Blake Ilustrador. Media tie-in. Language: English. Brand new Book. Now a musical! Matilda is a sweet, exceptional young girl, but her parents think she's just a nuisance. She expects school to be different but there she has to face Miss Trunchbull, a menacing, kid-hating headmistress. When Matilda is attacked by the Trunchbull she suddenly discovers she has a remarkable power with which to fight back. It'll take a superhuman genius to give Miss Trunchbull what she deserves and Matilda may be just the one to do it! Here is Roald Dahl's original novel of a little girl with extraordinary powers. This much-loved story has recently been made into a wonderful new musical, adapted by Dennis Kelly with music and lyrics by Tim Minchin. Nş de ref. del artículo: ABZ9780142425381