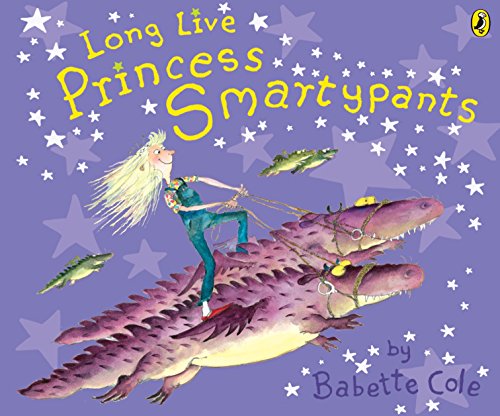 A modern fairy tale for the twenty-first century and a second adventure for the irrepressible and highly popular Princess Smartypants.
Princess Smartypants has decided she'd like to have a baby but doesn't want the husband to go with it. The King and Queen will not hear of such a plan and attempt to take her mind off it by keeping her busy. However, a crackly telephone line and a mixed-up grocery list result in Smartypants getting the baby she wants - until she discovers he has super-human strength and begins to wreak havoc around the Royal palace. Perhaps looking after a baby on her own isn't going to be as easy as she thinks! However, the baby is seen by Princess Smartypants's enemy, Prince Rottenghut, as a pawn in a plot to get his revenge and is duly kidnapped. Princess Smartypants launches a counter-attack to rescue her baby - will she see her baby again?

Babette Cole was born in Jersey in the Channel Islands. She graduated from Canterbury College of Art in 1973 and was the illustrator and author of more than 150 witty, imaginative, irreverent and thought-provoking picture books for children including the bestselling, stereotype-defying Princess Smartypants. She produced animated storyboards for the BBC and illustrated numerous greetings cards and books by other authors as well as her own. Babette adored the countryside and was a keen horse rider and breeder. She spent much of her life in Lincolnshire, before moving to Kent and then westward through Dorset, Devon and Cornwall.