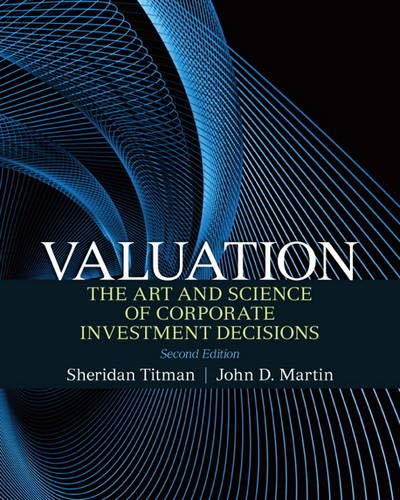 Seeing the economic realities of the modern corporation through an integrated approach. Titman/Martin presents an integrated approach to both project and enterprise valuation, showing readers the economic realities that today's modern corporations face. This text also goes beyond standard DCF analysis by including additional valuation methods that are commonly used in practice, such as comparables, simulations, and real options. The second edition includes an increased emphasis on enterprise valuation, a new chapter on financial forecasting, and enhanced examples and illustrations.

Sheridan Titman, University of Texas at Austin, Ph.D. Carnegie Mellon Sheridan Titman holds the Walter W. McAllister Centennial Chair in Financial Services at the University of Texas. He is also a research associate of the National Bureau of Economic Research and a consultant to a number of firms. Professor Titman began his academic career in 1980 at UCLA, where he served as the department chair for the finance group and as the Vice Chairman of the UCLA management school faculty. He has designed executive education programs in corporate financial strategy at UCLA and the Hong Kong University of Science and Technology, based on material developed for this textbook. In the 1988-89 academic year Professor Titman worked in Washington, D.C., as the special assistant to Assistant Secretary of the Treasury for Economic Policy, where he analyzed proposed legislation related to the stock and future markets, leveraged buyouts and takeovers. Between 1992 and 1994, he served as a founding professor of the school of Business and Management at the Hong Kong University of Science and Technology, where his duties included the vice chairmanship of the faculty and chairmanship of the faculty appointments committee. From 1994 to 1997 he was the John J. Collins, S.J. Chair in International Finance at Boston College. Professor Titman's areas of expertise include investments, performance evaluation of portfolio managers, corporate finance and real estate. He is an editor of the Review of Financial Studies and serves on the board of a number of other finance and real estate journals. He is a past director of the American Finance Association and a current director of the Asia Pacific Finance Association.

Descripci¾n soft cover. Condici¾n: New. International Edition. No supplemental materials. International Editions may have a different cover or ISBN but generally have the exact same content as the US edition, just at a more affordable price. In some cases, end of chapter questions may vary slightly from the US edition. International Editions are typically printed in grayscale, and likely will not have any color throughout the book. New. Books ship from multiple locations depending on availability. All orders are shipped with tracking information. We take pride in our customer service. Please contact us if you have any questions regarding this listing. N║ de ref. del artĒculo: 11719