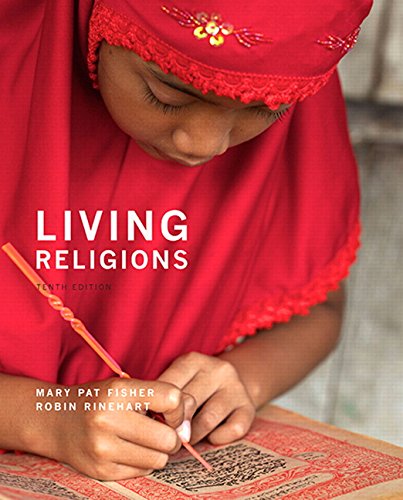 For courses in World Religions Help students understand the role of modern religions in today's changing world Living Religions provides a clear and straightforward account of the development, doctrines, and practices of the major faiths followed today. The emphasis throughout is on the personal consciousness of believers and their own accounts of their religion and its relevance in contemporary life. Authors Mary Pat Fisher and Robin Rinehart emphasize cultural customs, popular spiritual practices, and varieties of religious ways, as opposed to distinct monolithic institutionalized religions. The Tenth Edition includes new and revised content that helps students see how religion intersects with contemporary issues, including globalization, economics, and environmental and societal issues. Note: This is the standalone book, if you want the book/access card order the ISBN below; 013463053X / 9780134630533 Living Religions and NEW MyReligionLab with Pearson eText -- Valupack Access Card Package Package consists of: 0134168976 / 9780134168975 Living Religions 0205871429 / 9780205871421 NEW MyReligionLab with Pearson eText -- Valupack Access Card Living Religions, Tenth Edition is also available via REVEL (TM), an interactive learning environment that enables students to read, practice, and study in one continuous experience.

"Living Religions: A Brief Introduction" is a brief edition of "Living Religions, " fourth edition. It presents a stimulating survey of today's religious world. Exploring the historical developments and teachings of traditional faiths, indigenous religions, and new religious movements, this brief edition considers how each of these traditions has evolved into contemporary beliefs and practices. It examines the changing nature of each religion, the spread of religious pluralism, and the movement toward interfaith dialogue.

With the help of a team of specialist consultants in each faith, and drawing on a wealth of scholarly research and firsthand source material, Mary Pat Fisher gives a fresh and challenging insight into how believers of today's faiths perceive their religion and its role in the changing world in which they live. SPECIAL FEATURES

Descripción Paperback. Condición: Acceptable. CONTAINS WATER DAMAGE / STAIN, STILL VERY READABLE, SAVE! Please note that items may contain writing and/or highlighting and may not include CDs, access cards, or other supplementary material. We are not able to ship internationally. Your satisfaction is guaranteed! Items ship in quality packaging within 3 business days. Nş de ref. del artículo: mon0000339368

Descripción Paperback. Condición: Acceptable. The item is very worn but continues to work perfectly. Signs of wear can include aesthetic issues such as scratches, dents and worn corners. All pages and the cover are intact, but the dust cover may be missing. Pages may include moderate to heavy amount of notes and highlighting,but the text is not obscured or unreadable. May NOT include discs, access code or other supplemental materials. Nş de ref. del artículo: 4WIKSJ001VV8

Descripción Trade. Condición: Used - Very Good. The text is clean, with no writing, markings, underlining, highlighting or dog ears. The spine is uncreased and the binding is tight. The covers are clean. The side page edges have small blemishes in the center. One of the inside pages has a similar blemish on both sides but it does not touch the text. Copyright 2017 We are a Maryland-based brick-and-mortar store with over 15,000 volumes. Satisfaction Guaranteed!! NOTE: International shipping may be subject to additional charges. Nş de ref. del artículo: 573332